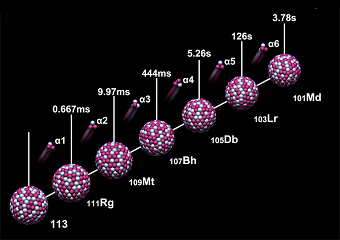 Sequence of consecutive alpha-decays from Element 113

The search for "superheavy elements", unstable synthetic elements with extremely short half-lives, is a difficult and painstaking process. Such elements do not occur in nature and must be produced through experiments involving nuclear reactors or particle accelerators, via processes of nuclear fusion or neutron absorption. Since the first such element, neptunium (Np) with atomic number 93, was discovered through synthesis in 1940, the US, Russia, and Germany have competed to synthesize more of them.

Japan joined the race in 2004, with its first synthesis of element 113. The discovery was made by the Superheavy Element Laboratory, headed by Associate Chief Scientist Dr. Kosuke Morita. Using the RIken LineAC (RILAC) linear accelerator and a novel nuclei separator, called the gas-filled recoil separator (GARIS), the group generated element 113 on the night of July 23, after years of research and preparation. The discovery was made possible thanks to the high performance capacity of RILAC and the careful selection of optimal incident energy for the beam nuclei. Two other events were recorded, on April 2, 2005 and then on August 12, 2012, cementing Morita's group's claim to the discovery, and on December 31, 2015, the International Union of Pure and Applied Chemistry (IUPAC) officially announced that element 113 was the first element to be discovered in Asia.

The new element was given the name "nihonium" and the chemical symbol Nh.