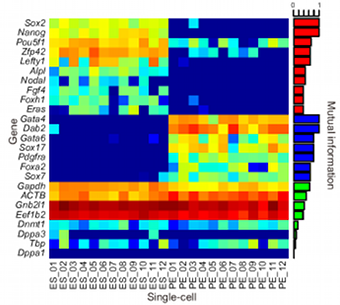 Heatmap of marker genes from results of single-cell Quartz-Seq

RNA-seq is a high-throughput sequencing technique that uses deep-sequencing technologies to generate a comprehensive view of the transcriptome (set of RNA molecules). Applications of the technique include studies of diseases such as cancer.

Researchers at the RIKEN Center for Developmental Biology (CDB) and RIKEN Quantitative Biology Center (QBiC) have developed a novel single-cell RNA-seq method called Quartz-Seq that has a simpler protocol and higher reproducibility and sensitivity than earlier methods. The method detects different cell types and different cell-cycle phases of a single-cell type, and can comprehensively reveal gene expression heterogeneity between single cells of the same cell type at the same cell cycle phase.

"The single-cell Quartz-Seq approach will be useful for the analysis of the roles and mechanisms of non-genetic cellular heterogeneity," the researchers write.