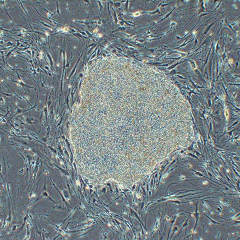 A key panel of the Japanese Ministry of Health, Labor and Welfare has given a conditional green light to clinical research involving induced pluripotent stem (iPS) cells. The research, to be conducted by Masayo Takahashi of the RIKEN Center for Developmental Biology in Kobe, will investigate the use of iPS cells in patients suffering from age-related macular degeneration, a common disease in elderly people that can ultimately lead to loss of vision. It is estimated that up to 700,000 people suffer from the disease in Japan.

The group plans to create autologous iPS cells using skin cells taken from a small number of patients, and then induce retinal pigment epithelium cells, or RPE cells, from each patient’s iPS cells. The RPE cells will be transplanted into the patients’ retinas in the form of a cell sheet, initially to gauge the safety of the therapy.

The research will be carried out in close collaboration between RIKEN and the Institute of Biomedical Research and Innovation, also in Kobe.

The plan will now go two more panels and then to the Minister of Health, Labor and Welfare, who is expected to give his official endorsement. The transplantation, which may begin next year at earliest, promises to be the first clinical application of iPS cells. iPS cell therapy gained international fame in 2012, when Kyoto University Professor Shinya Yamanaka, who discovered the process for creating iPS cells, was awarded the Nobel Prize in Medicine and Physiology. The Japanese government has made research on iPS cells a key priority in its science budget for FY2013.