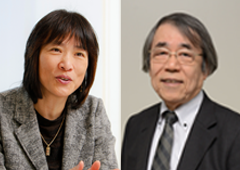 RIKEN is proud to announce that Mikiko Sodeoka and Masatoshi Takeichi have been awarded the distinction of Fellow by the American Association for the Advancement of Science (AAAS). This prestigious award is bestowed upon members by their peers, and recognizes their distinguished efforts to scientifically and socially advance science.

Dr. Sodeoka, chief scientist of the Synthetic Organic Chemistry Laboratory and leader of the Catalysis and Integrated Research Group at the RIKEN Center for Sustainable Resource Science, is receiving the award for her tremendous work in designing and synthesizing complex molecules with unique biological actions, including the selective control of proteins involved in post-translational modifications. Humbly acknowledging the award, Sodeoka said, "I am delighted to be elected as a AAAS Fellow, and thank all my past and present coworkers who share scientific excitement with me."

Dr. Takeichi, former director of the RIKEN Center for Developmental Biology in Kobe is being honored for his distinguished contributions to the fields of cell biology and developmental neuroscience. In particular, AAAS recognizes the importance of his efforts in identification and functional analysis of intercellular and synaptic adhesion molecules.

The award ceremony will be held on Saturday, February 14, at the AAAS Fellows Forum during the 2015 AAAS Annual Meeting in San Jose, California, and the new Fellows will be presented with an official certificate and a rosette pin whose gold and blue colors represent science and engineering.