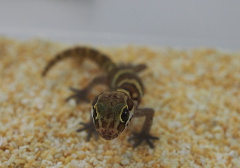 Research projects in the life sciences often employ model animals, and in the past birds—particularly chickens—have been used for immediate comparisons with mammals. However, evolutionary studies based on fossils and molecules have now clearly shown that birds are actually a specialized group of reptiles, descended from now-extinct dinosaurs—and that the mammalian ancestor arose from a reptile, and not from a bird.

A search is thus on for useful model reptiles to use in developmental biology. As part of this quest, researchers from the RIKEN Center for Life Science Technologies in Kobe focused their sights on the ocelot gecko (Paroedura picta), an adorable lizard from Madagascar, and produced an inventory of functioning genes in embryos of this species, with the goal of pinpointing the genes involved in its development. Females of this species lay eggs more often than those of many other reptilian species, and the eggs they lay contain relatively young embryos inside—features that make them useful for developmental biology.

The method employed to get the gene inventory is known as “transcriptome sequencing” or more precisely “RNA-seq,” as it examines what genes are expressed as RNA. This solution, which is based on a massively parallel sequencing platform, is being increasingly used for organisms with little molecular sequencing information available. With this study, the researchers introduced a new protocol for optimizing and evaluating RNA-seq through the coordination of sample preparation with the sequencing conditions and by deriving a reference gene set for the assessment of sequencing results, designating it as CVG (core vertebrate genes). The data produced in the study have been released online, and the team is now working on whole genome analysis of the species.

The research was published in BMC Genomics.