RIKEN is home to the world’s two greenest supercomputers 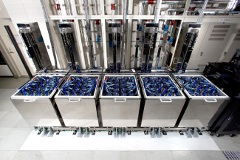 Two supercomputers developed as part of collaborations between RIKEN and a pair of companies—PEZY Computing and ExaScaler Inc.—have taken first and second place on the Green500 list of the world’s greenest supercomputers. Both of these computers use leading-edge liquid immersion cooling technology to achieve very efficient system cooling of the computing equipment. With the publication of the latest list on June 20, RIKEN became the first institute ever to simultaneously hold the two top spots.

First place went to Shoubu, a computer installed at the RIKEN Advanced Center for Computing and Communication (ACCC) in Wako, Japan. Following an upgrade in April this year, Shoubu has achieved performance in the 2-petaflop (theoretical peak performance) class, becoming the first large-scale supercomputer—defined as one achieving petaflop performance—to top the green list. Shoubu, which was developed by researchers from RIKEN and the two companies, is used for a wide range of areas including brain circuit modeling and optimization problems. It was recently used to model, in real time, the cerebellum of a cat. With the new list, Shoubu also became the first computer to hold the top spot for three consecutive rankings, covering a year and a half. The computer, whose cores fit into five small tanks, is ranked as the 93th most powerful computer in the world based on its LINPACK performance.

Second place went to Satsuki, a super-compact system installed at the RIKEN Computational Astrophysics Laboratory, also in Wako. Satsuki, which was developed by the same two companies as Shoubu, also ranked 475 on the Top500 list of the world’s fastest computers, marking the first time that a system small enough to fit into a normal office—taking up just three square meters of office space—has made the list. Thanks to the liquid immersion cooling system, there is no need to lower the temperature of the room, making it possible to operate it in a regular office.

Looking back at the process, Computational Astrophysics Laboratory Chief Scientist Toshikazu Ebisuzaki says, “When I first heard the idea, I had trouble believing that it would be possible to install a supercomputer in my own office, but thanks to the engineering efforts of our collaborators, we managed to do it.” Ebisuzaki says he plans to use the computer for many-body gravity simulations to understand planetary formation as well as a wide range of problems in life sciences, chemistry, and engineering.