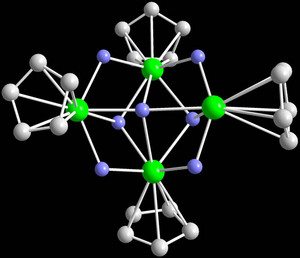 Figure 1:The core structure of the cationic tetranuclear complex based on yttrium (green). The bridging hydrogen atoms are shown in blue and the carbon atoms of the organic ligands are grey.

Catalysts are substances that are added in small quantities to chemical reactions to make them go faster or, in some cases, make them work when they otherwise wouldn’t. The development of new catalysts is of fundamental importance in chemical research—new catalysts lead to new reactions that, in turn, can be used to make new and improved products.

Zhaomin Hou and co-workers from the RIKEN Discovery Research Institute in Wako are developing catalysts based on the rare-earth metals—a group of elements that comprises scandium, yttrium and the lanthanides. Recently, they reported1 a new class of catalysts, called multinuclear polyhydrido complexes, in which four metals are linked together with hydrogen atoms.

Now, they have shown2 that these neutral compounds can undergo a simple chemical reaction—in which each cluster loses one hydrogen atom and two electrons—to form positively charged (cationic) rare-earth hydrides (Fig. 1), which are the first examples of their kind. These cationic complexes have completely different catalytic activities than their neutral precursors, and can be used to make polymeric materials that have not been made previously.

Polymers are produced when many copies of the same small-molecule, referred to as a monomer, are joined together to form chains, often in the presence of a metal-based catalyst. However, it is difficult to controllably polymerize some monomers, resulting in unwanted mixtures of differently connected products. One such example is 1,3-cyclohexadiene, a compound that can be polymerized to form a string of six-membered carbon rings that can be linked together in many different ways.

Using their cationic catalysts, however, Hou and co-workers have, for the first time, been able to selectively produce a single pure and crystalline polymeric product from 1,3-cyclohexadiene in which all of the rings are connected together in the same way. This regularity improves the mechanical properties of the material when compared with one in which there are different links along the chain.

Hou points out that polymers of this type have many desirable properties such as high thermal stability, good mechanical strength, transparency and chemical resistance. Moreover, as they still contain reactive sites along the chain, they can be used to make high-performance co-polymers by grafting other groups on to them.

But this is just the beginning. “The successful isolation of these cationic complexes has opened a new frontier in metal hydride chemistry,” comments Hou, “and could lead to the development of other new catalytic reactions.”