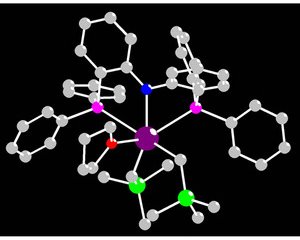 Figure 1:The structure of a catalyst precursor based on the rare-earth element lutetium (purple). The nitrogen and phosphorus atoms of the PNP ligand are shown in blue and pink, respectively. An oxygen atom is shown in red, the silicon atoms in green, and the carbon atoms in gray.

Rubber is a naturally occurring elastic material that is used to make many different products, ranging from tires to surgical gloves. The main component of natural rubber is a polymer called polyisoprene, which is made from a large number of smaller identical building blocks (an organic molecule called isoprene) linked in a chain.

Because natural sources are limited, chemists have devised ways to make synthetic rubber in the laboratory by polymerizing isoprene with metal catalysts. This is not straightforward, however, because there are many different ways in which isoprene molecules can be joined together. In particular, it is desirable for them to be linked at each end (1,4 substitution) with the carbon-carbon double bonds all adopting the same arrangement, known as ‘cis’.

“Although a variety of catalyst systems have been reported for the polymerization of isoprene, none have been able to produce polymers with both a narrow distribution of chain lengths and a high (>99%) cis-1,4-content,” says Zhaomin Hou from RIKEN’s Discovery Research Institute in Wako.

Hou and co-workers have now developed1 a catalyst system (Fig. 1) based on the rare-earth metals—a group of elements that comprises scandium, yttrium and the lanthanides—that can be used to make, in a highly selective fashion, cis-1,4-polyisoprene. The catalysts, which are positively charged, contain a central metal atom that is bonded to a carbon chain and an organic ligand containing one nitrogen and two phosphorus atoms—known as a bis(phosphinophenyl)amido or PNP group.

The catalysts react with isoprene and related compounds to make polymers in which there is little variation in the length of the chains. Such polymerizations are referred to as ‘living’, because once a growing chain is formed, it remains active (alive) and does not terminate (die). Since all of the chains start growing at roughly the same time with the same rate—and do not die—they grow to roughly the same size.

In this way, Hou and co-workers were also able to make polymers containing two different segments. After the catalyst had polymerized butadiene to give polybutadiene, the active catalytic sites at the ends of the ‘living’ chains were used to grow polyisoprene blocks when isoprene was added to the reaction.

Although rare-earth-based polymerization catalysts are not yet as widely recognized as those of group 4 metals (such as titanium and zirconium), Hou comments that, “they do possess unprecedented potential, and a prosperous future in this area can be confidently anticipated”.