The right mix for neuron culture 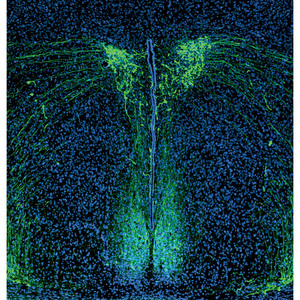 The hypothalamus is a part of the brain containing groups of neurons called nuclei, which regulate many body functions including blood pressure, stress, hunger, and sexual development and function. Understanding how the different populations of hypothalamic neurons develop from stem cells may enable scientists to cure diseases that are associated with hypothalamic dysfunction.

A team of researchers, led by Yoshiki Sasai at the RIKEN Center for Developmental Biology in Kobe, has now discovered that embryonic stem (ES) cells can mature into hypothalamic neurons only when as many exogenous signaling factors as possible are removed from the liquid medium in which the cells are grown1.

Mouse and human embryonic stem cells are often grown in liquid medium containing multiple growth factors such as those in ‘knockout serum replacement’ (KSR). ES cells grown in KSR often express markers characteristic of the telencephalon, which gives rise to brain structures such as the cerebrum and striatum. The KSR still contains factors, such as insulin, that may affect the maturation of the ES cells. So, when the researchers cultured the ES cells without KSR, they observed maturation of the cells into hypothalamic progenitor cells.

Insulin was the factor that inhibited hypothalamic maturation of the ES cells, since very few ES cells cultured in insulin expressed hypothalamic progenitor cell markers, such as the protein Rax. In addition, the researchers determined that ES cells were most sensitive to insulin during days 4 and 5 in culture.

Because these findings were all derived from work on mouse ES cells in tissue culture, additional experiments are needed to determine whether the mechanisms for hypothalamic development identified in the work would also apply in the setting of normal brain development and in humans.

In future experiments, Sasai says, “we will continue to study the molecular and cellular mechanism for the generation of other parts of the brain.”