Crystallizing the switch to hydrogen 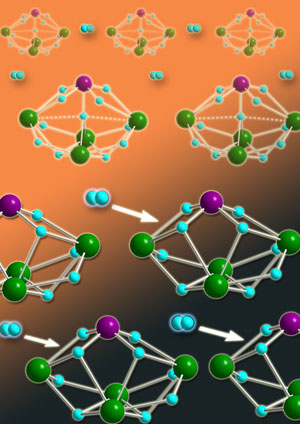 Hydrogen gas is an almost infinitely inexhaustible fuel source that emits only clean water during combustion. Switching from hydrocarbon-based transportation to systems powered by state-of-the-art fuel cells therefore seems a natural choice, but numerous obstacles have kept this technology confined to laboratories. A prime example is the problem of on-board hydrogen storage for vehicles: because ambient hydrogen gas is roughly 10,000 times less dense than gasoline, it would require impractically large tanks to obtain comparable mileage.

Compressing hydrogen gas or liquefying it at -250 °C are two ways to increase its energy content by volume. However, chemists are developing a more attractive strategy using specially designed compounds, called metal hydride clusters, to produce high hydrogen-storage densities without extreme temperatures or pressures. The metal atoms within these molecules bind to large numbers of hydrogen atoms, producing a solid that can reversibly add or remove hydrogen using mild heating or cooling.

Now, Zhaomin Hou from the RIKEN Advanced Science Institute in Wako and an international team of colleagues have isolated a new class of ‘heterometallic’ hydride clusters (Fig. 1) that may spur development of lighter and longer-lived fuel cell devices1. By incorporating multinuclear rare-earth metals into their compounds, the team has produced the first high-density storage molecules that have hydrogen addition properties that can be monitored directly using x-ray diffraction—a technique that provides clear insights into cluster structure and functionality.

Figure 2:Monitoring the reversible addition and release of a hydrogen gas molecule to a molybdenum–yttrium cluster in real time with x-ray crystallography has revealed the first atom-resolved insights into hydrogen storage by organometallic crystals.

For the past 25 years, chemists have paired so-called ‘d-block transition metals’, such as tungsten (W) and molybdenum (Mo), with lightweight rare-earth metals, such as yttrium (Y), to increase the storage capacity of hydride clusters. Because the nuclei of rare earths are shielded by many electrons, these metals can pack high numbers of hydrogen atoms into small crystal volumes without suffering electronic repulsions. Unfortunately, once hydrogen gas binds to a rare-earth metal, it tends to stay there. Mixing in d-block metals alters the rare-earth reactivity so that on-demand hydrogen storage and release can occur.

Until now, most of these combined metal hydrides were constructed using mononuclear rare-earth building blocks, such as YH, with a mononuclear d-block metal. Using a different strategy, Hou and his colleagues recently devised innovative protocols to isolate polynuclear rare-earth hydrides using large molecular ligands to trap these typically unstable compounds in place2. Polynuclear hydrides feature dense, interconnected networks of ‘bridging’ hydrogen atoms connected to two or more metals—characteristics that led the researchers to explore their potential for hydrogen storage applications.

“It is not difficult to imagine that hydrogen atoms could bond to multiple metal atoms in a polynuclear polyhydride complex, and the [mode of] bonding could be different with different metal combinations,” says Hou. “However, it is not easy to prepare quality polyhydride samples for high-precision structure determinations. Hydride complexes containing both rare-earth and d-block transition metals are even more difficult to prepare because of their air- and moisture-sensitivity.”

Performing their experiments inside nitrogen-filled and humidity-free enclosures, the team mixed one of their carefully prepared polynuclear complexes—four yttrium metals and eight hydrogen atoms held together by bulky organic ligands—with either a Mo or W pentahydride. After precipitating crystals out of the reaction, they used x-ray and neutron diffraction experiments to view their product’s atomic structure. These measurements showed that the two metallic components fused together, yielding a Y4MH11 (M = Mo, W) hydride with double-, triple-, and quadruple-bridged hydrogen atoms.

Zapping the penta-metallic polyhydride with ultraviolet light enabled the team to remove a protective phosphorus ligand and increase the hydrogen bridging density within the cluster. This produced the first hydride cluster where hydrogen is bonded to five metals in a distinctive symmetry known as trigonal bipyramidal. “The confirmation of a penta-coordinated hydrogen atom in this geometry is unprecedented,” says Hou.

Hou and colleagues’ experiments then demonstrated that their heterometallic clusters possessed critical hydrogen storage and release capabilities. Heating H2 and Y4WH11 to 80 °C caused an oxidative addition of the gas molecule to the cluster, which they could reverse through ultraviolet-light treatment. Despite the Y4MoH11 molecule not responding to the same chemical tricks, the researchers discovered that applying a vacuum could suck H2 from the cluster, giving a new Y4MoH9 complex. Exposing this compound to hydrogen gas at room temperature spontaneously regenerated the original molecule (Fig. 2).

According to Hou, the most striking aspect of this chemistry is that the hydrogen addition to the Y4MoH9 cluster can be followed from single crystal to single crystal—meaning that the starting material, the reaction intermediates, and the product all retain the same rigid morphology. “No metal hydrides have previously shown such excellent crystallinity,” he notes.

After gingerly sealing a Y4MoH9 crystal into a thin, hydrogen-filled capillary tube, the researchers monitored the spontaneous addition reaction over 60 hours. As the cluster gradually took in hydrogen and changed color from black to red, they watched—at precision greater than one-millionth of a meter—yttrium and molybdenum atoms separate and shift within the crystal unit cell. By providing the first-ever atom-resolved views of active sites and bonding modes for hydrogen addition to an organometallic crystal, these findings should aid design of more sophisticated alloys in the future.

Theoretical calculations performed by the researchers indicated that combining two metals with starkly different electronic properties played a big role in giving the clusters their unique reactivity. With wide swaths of the periodic table available for exploring using this technique, breakthroughs in heterometallic hydride materials may have only just begun. 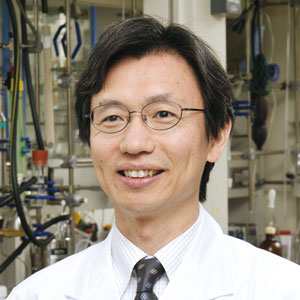 Zhaomin Hou was born in Shandong Province, China, in 1961. He graduated from the China University of Petroleum (Shandong, China) in 1982, and obtained his PhD in chemistry in 1989 from Kyushu University (Fukuoka, Japan). After postdoctoral training at RIKEN (1989–1991) and the University of Windsor (Windsor, Canada) (1991–1993), he joined RIKEN as a Research Scientist in 1993. He was promoted to Senior Scientist in 1997 and to Chief Scientist in 2002. Since then, he has been directing the Organometallic Chemistry Laboratory at RIKEN. His current research interests include the development of novel catalysts for more efficient, selective chemical transformations and the development of novel functional materials.