Long-term benefits from a ‘moment of silence’ 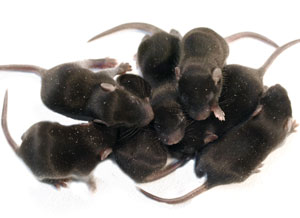 Reproduced from Ref. 1 © 2012 by the National Academy of Sciences

In principle, somatic cell nuclear transfer (SCNT) is a potent tool for scientists looking to produce exact genetic replicas of a particular animal. By injecting a nucleus from an adult cell into an oocyte from which the nucleus has been removed, one can initiate the embryonic development process and derive a clone of the ‘donor’ animal.

Unfortunately, this technique is terribly inefficient, with a success rate of 1–2% in mice. “This must be due to some errors in the reprogramming of the donor genome into the ‘totipotent’ state, which is equivalent to the state observed in conventionally fertilized embryos,” explains Atsuo Ogura of the RIKEN BioResource Center in Tsukuba. However, Ogura and colleagues have now made significant progress in clearing a major roadblock thwarting SCNT success1.

During development of female mammalian embryos, one of the two X chromosomes is targeted for inactivation, thereby ensuring that both males and females achieve equivalent expression of X-linked genes. This inactivation depends on RNA produced by theXistgene, which blankets the selected chromosome and sets the inactivation process in motion.

Ogura and his team previously determined that Xist is inappropriately activated in SCNT embryos2, impairing expression of essential genes, and have now set about correcting this defect. Irreversibly inactivating this gene is not an option, so the researchers injected molecules called ‘short interfering RNAs’ (siRNAs) that directly inhibited Xist activity in early stage male SCNT embryos, which must maintain their single X chromosome in order to survive.

This treatment markedly boosted expression of X chromosomal genes relative to untreated controls, and although the direct effects of siRNA injection were fleeting, the benefits lingered. “The siRNA was effective for only 72 hours,” says Ogura, “but it had long-term effects not only on the birth rate but also on the health status of the offspring.” Indeed, his team achieved a success rate of nearly 20%—ten-fold better than previous efforts—and generated mouse pups that were apparently normal and healthy (Fig. 1).

The implications for this improved efficiency extend beyond mass-produced mice, and this approach could represent a step toward improving the economics of cloning other species such as pigs and sheep, which are harder to genetically manipulate but nevertheless of considerable agricultural and scientific interest. “Our goal is to increase the birth rate of healthy cloned offspring not only in mice but also other mammals,” says Ogura, “and to understand the mechanisms by which the genome is drastically altered during the life cycle.”