Making iron transparent in the quest for shorter x-ray pulses

An intense x-ray beam can make iron foil transparent for just an instant, allowing ultrashort x-ray pulses to pass through 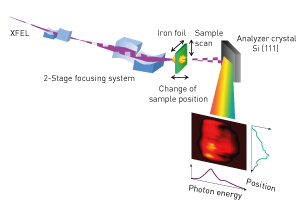 Figure 1: Focusing an x-ray beam produced by the SACLA x-ray free-electron laser (XFEL) onto a tiny spot results in a beam intensity sufficient to induce saturable absorption in an iron foil sample, which makes it transparent to the beam for a few hundred attoseconds. The technique could be used to produce ultrashort x-ray pulses.

An intense blast of high-energy x-rays can make iron transparent to the beam for less than a femtosecond, researchers from the RIKEN SPring-8 Center have found1. The technique could be used to produce ultrashort x-ray pulses for probing materials at the electron scale.

X-ray free-electron lasers can produce x-ray pulses that last for just femtoseconds, allowing the structure of atoms to be observed in amazing detail. To understand the dynamics of these infinitesimally small systems, however, scientists need to use pulses hundreds of times shorter, measured in attoseconds. Researchers led by Makina Yabashi from the Beam Line Research and Development Group at the RIKEN SPring-8 Center and Hitoki Yoneda from the University of Electro-Communications have now developed a technique that could allow such attosecond x-ray pulses to be produced for the first time. This method involves using high-energy x-ray beams in combination with a phenomenon called saturable absorption.

When light shines on a material, it delivers energy to the electrons surrounding a fraction of the material’s atoms, exciting them to higher energy states that last just a few hundred attoseconds. However, if the light is sufficiently intense, all the electrons in the material can be excited at once. This results in a saturated state in which the material cannot absorb any more light, allowing x-rays to pass through the material freely. Yabashi and Yoneda wanted to use this short period of transparency to produce ultrashort x-ray pulses.

Achieving saturable absorption using high-energy x-rays is theoretically possible but has proved challenging in practice due to the very short lifetime of the excited states. It takes an extremely intense x-ray pulse to achieve saturation and transparency.

Using the SACLA x-ray free-electron laser at the SPring-8 synchrotron facility and a specially developed focusing system (Fig. 1), the research team produced an intense x-ray beam with a spot size of just 50 nanometers, giving an unprecedented intensity of 1020 watts per square centimeter. Aimed at a 20-micrometer-thick iron foil target, the beam caused the transparency of the iron foil to increase by a factor of 10 within 2 femtoseconds. “The change was quite dramatic,” says Yabashi.

This brief window of transparency should make it possible to produce attosecond-order x-ray pulses. The iron’s transparent state also sharpened the wavefront of the x-ray beam.

“The next stage is to utilize this finding in many interesting practical applications, such as attosecond shutters, atom lasers, and x-ray nonlinear waveguides,” says Yabashi.