The secret of the turtle shell

The evolutionary riddle of the turtle shell is one step closer to being solved thanks to groundbreaking research published this week in Science. A team of Japanese scientists has uncovered anatomical clues charting the developmental path by which the turtle acquired its shell.

Turtle morphology poses a unique puzzle in that the turtle's scapulae (shoulder blades), situated outside the ribs in other animals, are found inside its shell (which is formed from the bones equivalent to ribs in other species). To explain this inside-out skeletal morphology, researchers at the Laboratory for Evolutionary Morphology of the RIKEN Center for Developmental Biology compared embryonic development of the turtle to that of chicken and mice. While muscles and skeletons initially developed in a similar way, turtle embryo development diverged at a late stage, with the ventral part of the body wall folding inwards together with the scapula, a step made possible by the anatomical layout of the turtle embryo.

Their findings also indicate a resemblance between the early form of the turtle embryo and that of Odontochelys, a 220 million-year-old fossil species unearthed in China last year, believed to represent the ancestor of all modern turtles. Based on their results, the research group has concluded that modern turtle anatomy results from the late development of ribs in an Odontochelys-like ancestor, unraveling the long-standing mystery of the turtle and its shell.

Figure 1: Comparison of musculoskeletal system between human and turtles

(Top) Skeleton of human and turtle. In human, the scapula is situated outside the ribs, while in turtles, it is located inside the ribs.

(Bottom) The muscle plate is added to the top figures. In human, muscle plate spans adjacent ribs and occupies the same layer with them, suggesting that muscle plate can indicate the position of ribcage. In turtles, the muscle plate runs between ribs like human but in its ventral side, it is folded inward (arrow) and can be found inside the scapula, implying turtle scapula is outside presumptive ribcage shown by the muscle plate.

Figure 2: Comparison of muscles connecting the trunk and shoulder girdle/forelimb

Deep (as, serratus anterior; lsr, levator scapulae and rhomboid complex) and superficial (ld, latissimus dorsi; p, pectoralis) muscles are shown in transverse view (A and D) and lateral view (B, C, E and F). (B and E) The muscles in the inner layer, connecting the shoulder girdle and trunk, and (C and F) superficial ones connecting the upper arm and the trunk are illustrated. Note all the muscles are inside of the carapace in turtles and outside of ribs in chicken. The latissimus dorsi of turtle spread anterior to the shoulder joint (F), not posterior as in chick (C). Turlte pectoral muscle attaches inside the plastron (F), not outside the sternum as in chick (C). as, serratus anterior; ld, latissimus dorsi; lsr, levator scapulae-rhomboid complex; nu, nuchal bone; p, pectoral muscle; pl, plastron; r, ribs; r1, the first rib; sc, scapula; st, sternum.

According to the recent molecular phylogenic studies, turtles, birds and crocodiles are supposed to be classified as Archosaur and share the same ancestor. Mammals are out group of the Archosaur and both of them are descendants of the same ancestor. These relationship indicate that the developmental features observed in turtles and not both in chick and mouse or vice versa are changes which were occurred at the time of turtle evolution. 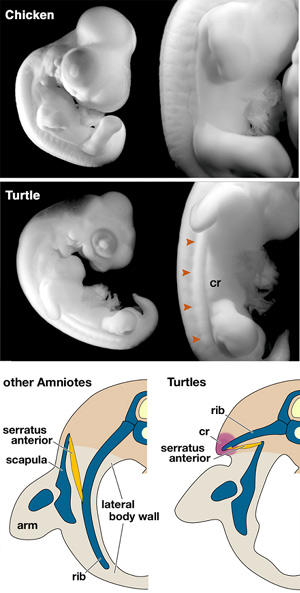 (Top and Middle) Lateral view of chicken embryo (Top) and turtle embryo (Middle). CR uniquely develops in the lateral aspect of turtle flank and form a rcarapcial margin. (Bottom) Schematic transverse views to compare the topography of ribs, body wall, arm with shoulder girdle between the embryos of turtles and generalized amniotes. Generally, the amniote ribs grow ventrally into the lateral body wall, whereas in the turtle, they are arrested in the dorsal part of body (dark brown), growing toward carapacial ridge, primordium of carapacial margin. Serratus anterior muscle situated outside the ribs in other amniotes takes ventral side of ribs in turtles due to the folding of lateral body wall.

Figure 7: Comparison of the topography of ribs, scapula and muscle plate

Generally, the amniotes' ribs and muscle plate grow together ventrally and make a single layer in body, outside of which the scapula is situated. In turtles, ribs grow laterally and are confined dorsally. However muscle plate is folded at the tip of ribs and runs inside the scapula as in other amniotes, showing basic topology between the elements is not changed both in turtles and other amniotes.

Figure 8: Developmental twisting of AS muscle in P. sinensis

Cartilages were stained with alcian blue and muscles were immunochemically stained with MF20, in whole mounts of stages 16 to 19 P. sinensis embryos. The boxes on the left column photos are magnified to show schematically the relationships between the AS muscle (red), scapula and the ribs (r1-3) in the right column. At the middle stage (A), the scapula (sc) is situated anterior to the most anterior rib (r1) and AS muscle began to develop between the scapula and anterior ribs antero-posteriorly. In the following stages (B to D), turtle ribs grew laterally and anteriorly and covered the scapula dorso-posteriorly, keeping the connection with other elements. As the result, ventral muscle plate was folded inward and the AS muscle was twisted and assumed ventral position of ribs. Scale bars, 500 μm for A to D, 1 mm for K. 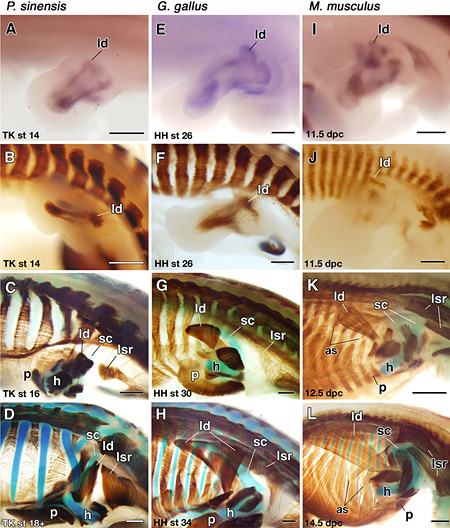 (A to D) P. sinensis-, (E to H) chicken-, and (I to L) mouse embryos. (A, E and I) Expression of Lbx-1 in the right forelimb buds before muscle differentiation. Lbx-1-positive cells show migrating muscle precursors and proximal part of it represent latissimus dorsi muscle primordia. (B to D, F to H, J to L) Immunostained embryos to show muscle and peripheral nerve development. Distal parts of the forelimb buds have been removed at the level of the humerus (h). The latissimus dorsi muscle anlage appears at the corresponding position in all the animal though (B, F and J), the muscle of turtle grow anteriorly to the shoulder joint (C and D), not posteriorly as in chicken and mouse (F to H and J to L). Scale bar, 500 μm. 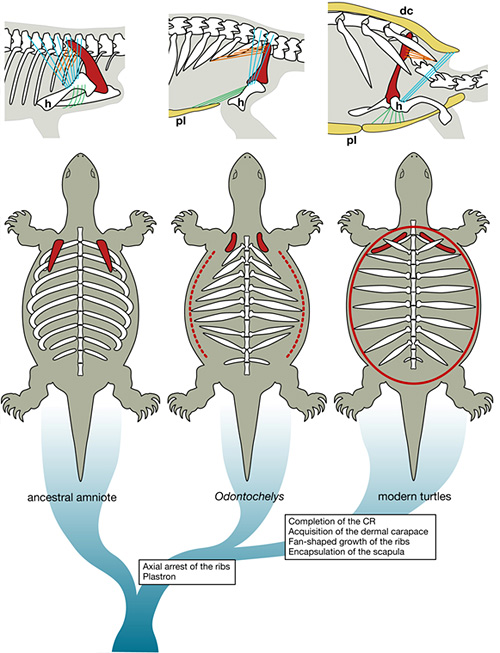 (Top) A hypothetical sequence of changes in musculoskeletal connectivities. The scapula is red, AS muscle orange, latissimus dorsi blue, and pectoralis green. In Odontochelys, the AS would have connected the scapula and distal tips of anterior ribs antero-posteriorly. The pectoralis would have connected the humerus and the plastron (pl). (Below) A phylogenetic consideration. In Odontochelys, the CR (red broken line) may have developed only temporarily and incompletely in the embryo. In the modern turtle, the CR (red solid line) forms a complete circle, inducing the fan-shaped growth of the rib, resulting in encapusulation of the scapula and AS muscle in the carapace. dc, dermal carapace. 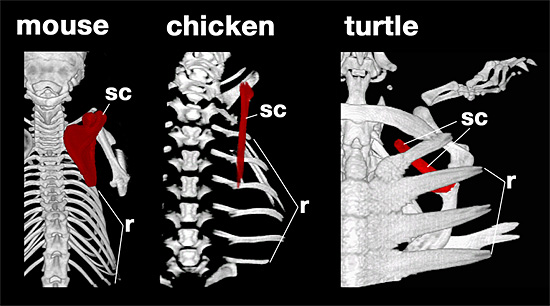 Figure 11: Comparison of skeleton among amniotes

Dorsal views of computerized axial tomography-scanned animals.Adult mouse (Left), chick hatchling (middle) and turtle juvenile (right). Note scapula (red) is outside ribs in mouse and chick, and inside the ribs in turtle.