Zeroing in on the proton's magnetic moment

As part of a series of experiments designed to resolve one of the deepest mysteries of physics today, researchers from RIKEN, in collaboration with the University of Mainz, GSI Darmstadt, Helmholtz-Institut Mainz, and the Max Planck Institute for Physics at Heidelberg, have made the most precise ever direct measurement of the magnetic moment of a proton.

The work, published in Naturetoday, seeks to answer the fundamental question of why we exist at all. It is believed that the Big Bang some 13 billion years ago generated equal amounts of matter and antimatter—which annihilate when they collide—and yet the universe today seems to contain only matter. Work is being carried out from many fronts to detect differences that would explain this, and one promising route is to compare the magnetic moments of particles and their antimatter conjugates, as even a tiny difference could explain the matter-antimatter asymmetry. The research collaboration is working to measure the magnetic moment of the proton and antiproton to unprecedented precision, and determine if there is any difference.

In the study published today, the researchers reached an important milestone by directly measuring the moment of a single proton to enormous precision, based on spectroscopy of a single particle in a Penning trap. Andreas Mooser, first author of the paper, explains that "this important quantity has never been measured directly and is so far only known at a relative precision of about 10 parts per billion, based on hyperfine spectroscopy of a MASER in a magnetic field. However, this required significant theoretical corrections to extract the proton's magnetic moment from the measurement." In the new paper the researchers report the first direct high precision measurement of the proton magnetic moment at a fractional precision of 3 parts per billion, improving the 42-year-old "fundamental constant" by a factor of three.

The team's method using a single particle in a Penning trap can now be directly applied to measure the magnetic moment of the antiproton, which is currently known at a relative precision of only 4 parts per million.

According to RIKEN researcher Stefan Ulmer, second author of the paper and spokesperson of the BASE collaboration at CERN which aims at the high precision measurement of the antiproton moment, "Using this method will allow the value to be improved by at least a factor of thousand, providing a stringent test of matter-antimatter symmetry." 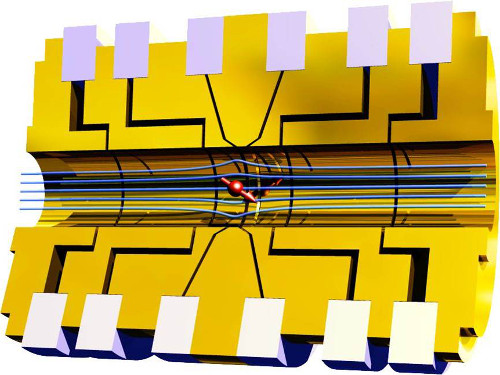 Schematic of a single proton being trapped in the Penning trap 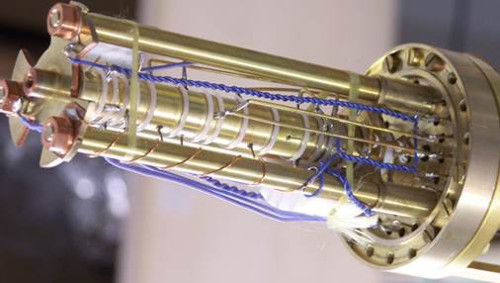