Recalling an emotional experience, even years later, can bring back the same intense feelings. Researchers from the RIKEN-MIT Center for Neural Circuit Genetics revealed the brain pathway that links external events to the internal emotional state, forming one memory by engaging different brain areas. The study published in the journal Nature, also demonstrates that the positive or negative emotional valence of memory can be reversed during later memory recall.

The research team, led by Dr. Susumu Tonegawa, was interested in how brain structures like the hippocampus and the amygdala collaborate to form memories. In particular, they wanted to know whether the emotional valence—which describes the attractiveness or averseness of an emotion as positive or negative, and is thought of as an internal state of a person—is stored in the same place in the brain as the memory of an event that caused the emotion.

"Both the hippocampus and the amygdala are considered critical for memory formation. We wanted to know whether the memory engram was free to associate with positive or negative valences or whether it was fixed with respect to emotion," said Roger Redondo, who along with Joshua Kim is co-first author of this study. "We also wanted to know at what point in the circuit the valence is assigned to the engram, in the hippocampus or the amygdala."

In the experiment, mice were placed in a novel chamber and some were given a mild foot shock, while others were allowed to socialize with a female mouse, forming either a fear or a rewarding memory. The researchers were able to genetically label neurons that were active during the formation of either memory. The same neurons were then activated using optogenetics—a technique that harnesses light-sensing machinery from microbial organisms to precisely control activity of specific brain cells using pulses of light. Depending on the valence of the initial experience, the researchers could judge from the mouse's behavior whether the activated memory was a fearful or a rewarding one by whether the mice avoided or were attracted to a particular location in the chamber where the memory neurons were optogenetically activated.

"If our technology drives memory engrams, it should work independently of whether the valence is negative or positive," explained Dr. Redondo. "We wanted to show that the memory reactivation was not restricted to fear memories, as we had used in the past."

To address the question of where in the brain the memory of an event and its emotional valence are stored, the researchers attempted to switch the valence of memories in mice from negative to positive and vice versa. The mice were given a new experience of the opposite valence while the researchers simultaneously activated the original memory in either the hippocampus or the amygdala. As a result, the memory engram stored in the hippocampus could change its valence. Mice who originally received foot shocks no longer showed fear when recalling that experience. Conversely, mice that originally socialized with a female now showed fear. The valence of the memory engram in the amygdala, on the other hand, could not be altered.

The researchers concluded that the hippocampal memory was neutral and could freely associate with either positive or negative emotions, while the amygdala is hard-wired for either negative or positive experiences. This study reveals an unanticipated flexibility in brain circuits during memory formation for emotional events. The findings may help explain the success of behavioral therapy for people with phobias or PTSD, and suggests the possibility of developing novel treatments for these and other disorders affecting emotions, such as depression, through manipulation of hippocampal memory cells. 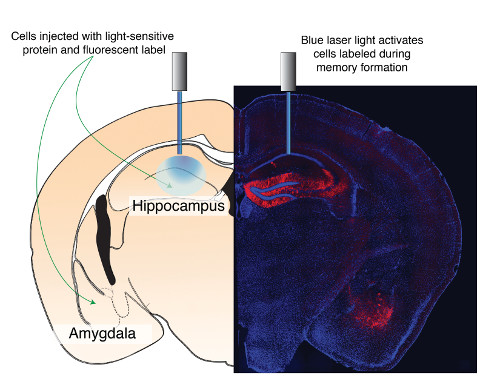 The two areas were injected with a virus carrying the gene for the light-inducible protein.

Summary of one of the main findings