Almost four years after the accident at the Fukushima Daiichi Nuclear Power Plant in Japan, farmland remains contaminated with higher-than-natural levels of radiocesium in some regions of Japan, with cesium-134 and cesium-137 being the most troublesome because of the slow rate at which they decay. In a study published in Scientific Reports, a group at the RIKEN Center for Sustainable Resource Science in Japan led by Ryoung Shin has identified a chemical compound that prevents plants from taking up cesium, thus protecting them—and us—from its harmful effects.

Although cesium has no beneficial function in plants, it is readily absorbed by plants in contaminated soil due to its water solubility and its similarity to potassium, a critical plant nutrient. After being absorbed, it continues to compete with potassium inside plant cells, disrupting physiological processes and causing major retardation in plant growth. Because of this, the research team focused their efforts on finding a way to prevent cesium uptake.

First, they used seedlings from the model plant Arabidopsis thaliana and tested 10,000 synthetic compounds to determine if any could reverse the harmful effects of cesium. The effects of each compound were quantified with a scoring scale, and after several screenings, they had found five compounds that made plants highly tolerant to cesium.

Next they looked at how these five compounds—termed CsTolen A-E—produced their effects. They found that when Arabidopsis was grown in cesium-containing liquid media with CsTolen A, more cesium remained in the liquid medium and much less was found in the plants. Importantly, the concentration of CsTolen A needed for this effect did not prevent the plants from absorbing the potassium that they need to grow. Further tests showed that rather than helping cells to expel cesium after it has been initially absorbed, CsTolen A acted to prevent cesium from entering the roots.

Quantum mechanical modeling indicated that although CsTolen A likely binds to other alkali metal ions, such as potassium and sodium, it should preferentially bind to cesium in aqueous solutions. This was confirmed by testing in which CsTolen A did not reverse sodium-induced or potassium deficiency-induced growth retardation, indicating that its effects appear to be specific to cesium.

Most importantly, when plants were germinated and grown in cesium-contaminated soil, applying CsTolen A significantly reduced the amount of cesium absorption and resulted in greater plant growth.

As Japan prepares to mark the fourth year since the events of March 2011, lead author Eri Adams notes that, “we think our findings shed some light on the possibility of using chemicals to prevent agricultural products from being contaminated.” This technique is called phytostabilization, and Adams adds that, “unlike other methods such as genetic modification, use of chemicals is a powerful tool that can alter plant responses to the environment regardless of their species, which is especially true in the case of CsTolen A because it binds to cesium before it can enter the plants.”

Shin’s research unit is devoted to finding solutions to several environmental and agricultural problems through studying the mechanisms of nutrient uptake. Not only will the current findings help plants, but by reducing the amount of radiocesium that enters them, it should also ensure the safety of agricultural products grown in contaminated soil. As decontaminating large areas of farmland is a difficult venture at best, CsTolen A could be a game saver for regions affected by radiocesium contamination. 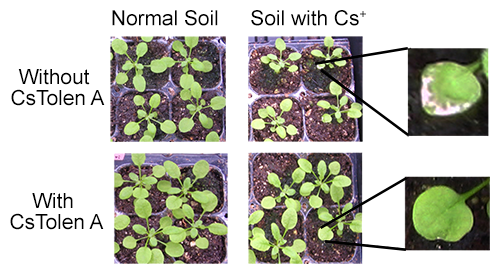