Ever since Kepler’s observation in the 17th century that sunlight is one of the reasons that the tails of comets to always face away from the sun, it has been understood that light exerts pressure in the direction it propagates. Radiation pressure is produced by the momentum carried by light, and it plays a crucial role in a variety of systems, from atomic to astronomical scales.

In a recent theoretical paper (Extraordinary momentum and spin in evanescent waves Konstantin Y. Bliokh, Aleksandr Y. Bekshaev, Franco Nori Nature Communications, 2014 DOI: 10.1038/ncomms4300), a group from the RIKEN Center for Emergent Matter Science in Japan showed that momentum density in non-uniform optical fields has an unusual component, which is orthogonal to the propagation direction of light and is proportional to the optical spin, which means the degree of circular polarization. They predicted that this spin momentum would produce a transverse spin-dependent optical force, a few orders of magnitude weaker than the usual radiation pressure.

Now, based on the theoretical work, a group from RIKEN, the University of Bristol, and other institutions have used an extremely precise technique to experimentally verify that light does in fact exert the extraordinary perpendicular force, which is determined by the polarization of the light. This work was published in Nature Physics.

To measure the new type of optical momentum and force, they used an extremely sensitive nano-cantilever, capable of femtoNewton resolution—meaning it could measure a force even smaller than the force gravity exerts on a single bacterium—which was immersed in an evanescent optical field directly above a total-internal-reflecting glass surface. According to Konstantin Bliokh, the corresponding author of the paper, “Our findings revisit fundamental momentum properties of light and, revealing a new type of optical force, enrich optomechanics.”

Looking to the future, Franco Nori, who led the research team, says, “Our group’s investigations integrate relativistic field-theoretical, quantum-mechanical, and optical aspects of the dynamical properties of light. They offer a new paradigm which could provide insights into a variety of phenomena: from applied optics to high-energy physics.” 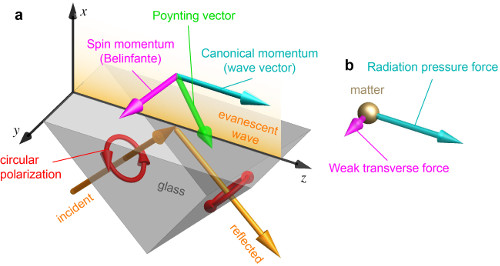 Canonical and spin momenta of light in an evanescent wave

a, The figure shows an evanescent wave generated by the total internal reflection of a polarized plane wave at a glass–air interface. It carries longitudinal canonical momentum determined by its wavevector and exhibits transverse spin momentum determined by the degree of circular polarization of the field. b, The longitudinal canonical momentum produces the well-known radiation pressure in light–matter interactions, whereas the transverse spin momentum exerts a weak helicity-dependent force orthogonal to the propagation direction of light.