Scientists show how plants turn a “light switch” on and off

In research published today in Science, an international team of researchers led by scientists at the RIKEN Center for Sustainable Resource Science in Japan, Fujian Agriculture and Forestry University, China, and the University of California, Los Angeles, have uncovered the mechanisms through which cryptochrome 2—a key photoreceptor that allows plants to respond to blue light—is switched on and off, allowing plants to remain responsive to light.

Plants rely on light to carry out photosynthesis, though which they produce energy, but response to light is important in other ways as well. Plants grow during the nighttime, using the energy they stored during the daytime, and long-day plants begin to flower when the day grows longer and the night shorter. Though it was long known that blue light played a key role in activating plants’ response in the natural light environment, through the action of cryptochromes—blue light photoreceptors—and other photoreceptors, the mechanism through which the response was turned on and off remained elusive.

In recent years, significant progress has been made in understanding the function of cryptochromes. Initially it was hypothesized that the receptors were activated and inactivated through a process of “photoreduction”—a system like that used in the process of photosynthesis where electrons are transferred, moving energy across molecules.

To determine whether this was the real mechanism, the group began by screening transgenic lines of Arabidopsis—a model grass used in plant genetics—using the FOX library developed by Takanari Ichikawa and Minami Matsui of the former RIKEN Plant Science Center, to find lines that expressed phenotypes similar to a mutant strain that does not respond properly to blue light. They identified lines that overexpress a protein, named BIC1, which corresponded to the mutant phenotype. They determined that this protein blocks the action of the cryptochrome 2 photoreceptor.

Further, through a series of experiments, they were able to show that it was not a process of photoreduction, and uncovered the exact mechanism through which this takes place. It turns out that cryptochrome 2 undergoes a conformational change—taking a dimer form—when exposed to blue light, and that this homodimer form is the active form. The dimer form, however, disappeared in the presence of the BIC1 protein. “We have shown,” says Matsui, one of the leaders of the study, “that there is a desensitization mechanism, where the photoactivated photoreceptor is regulated in blue light to avoid excess response. This is important as it allows plants to maintain the homeostasis of their blue light responsiveness in order to adapt to the fluctuating light environment in nature.”

Matsui continues, “Through this work, we hope to learn how we can use the action of BIC1 to develop plants with better biomass characteristics. This work is also important because animal cryptochromes also form homodimers, and this can help us gain clues into how the circadian rhythm is maintained in animals.” 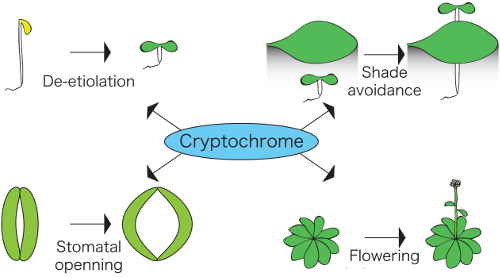 Cryptochromes respond to blue light to regulate a variety of traits such as de-etoliation, shade avoidance, flowering, and stomatal opening. 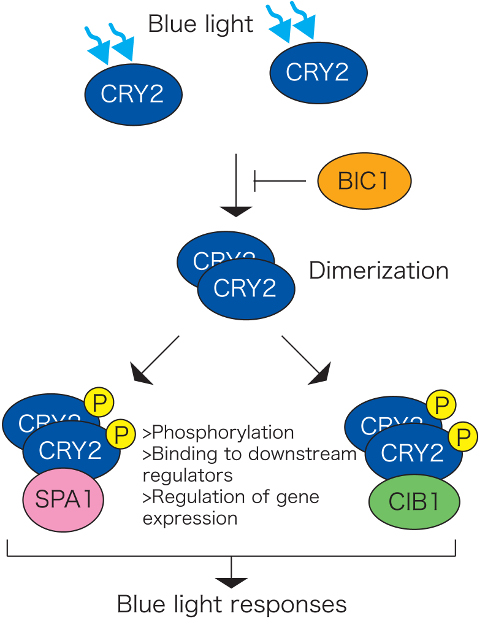 Schema of how the cryptochrome regulates the response to blue light

The CRY2 cryptochrome becomes a homodimer in response to blue light. The dimerized CRY2 becomes phosphorylated and regulates the expression of downstream genes such as SPA1 and CIB1, leading to changes in the plant's response to blue light. When BIC1 and CRY2 bind, this prevents the dimerization of CRY2 and the transmission of information from CRY2.