Sugar element of keratan sulfate halts the progress of emphysema

Using a mouse model, scientists from the RIKEN-Max Planck Joint Research Center for Systems Chemical Biology and a number of other institutes have identified a sugar molecule that reduced the inflammatory response and progress of emphysema, a common component of chronic obstructive pulmonary disease (COPD). According to Naoyuki Taniguchi, the leader of the group, this discovery could lead to the development of drugs based on glycans—biological sugar molecules—for the treatment of diseases such as COPD, which is the fourth leading cause of death worldwide.

As part of the research group’s work to explore the roles of sugar molecules in health and disease, they found that keratan sulfate, a large negatively charged saccharide found in the small airway of the lung, is decreased in mice that have been exposed to cigarette smoke. They wondered if this decrease might be associated with the damage that smoking causes to the lung. Taniguchi says, “We are not absolutely sure of the mechanism through which smoking leads to a reduction in keratan sulfate, but felt that clearly the reduction is important in thinking about glycan-based strategies for combating emphysema and COPD.”

They wondered whether the keratan sulfate might be playing a protective role in COPD. To test the hypothesis, they prepared a repeating disaccharide element of keratan sulfate, named L4, and administered it into two mouse models of emphysema—one a model of emphysema triggered by the enzyme elastase, and the other an exacerbation of smoking-induced emphysema triggered by LPS, a toxin found in bacterial cell walls.

In the first model, they found that that treatment with L4 prevented destruction of the alveoli—the small air sacs in lungs that are used to exchange gases, and in addition that it reduced the infiltration of a type of white blood cell called neutrophils, which is symptomatic of an inflammatory response, as well as levels of inflammatory cytokines and tissue-degrading enzymes. Although L4 was shown to inhibit these enzymes, they did not find any ability of L4 to directly reduce the production of cytokines or reactive oxygen species, so concluded that the action was also being done indirectly, through mechanisms involving the neutrophils.

In the exacerbation model, they found that the L4 administration prevented the influx of neutrophils. According to Taniguchi, “We found that L4 was as effective as dexamethasone in reducing neutrophil infiltration. This is very exciting, because dexamethasone, the treatment currently used for COPD, is a steroid medication that can have serious side effects and can in some cases make the outcome worse. It will be exciting if we can show that L4—a sugar molecule which we found had no adverse effects in the mice even at high doses—can be used as a treatment for this condition, which exerts a tremendous health burden.”

According to Taniguchi, there is still work to be done in the area. “We plan now to try to determine exactly how L4 blocks neutrophil migration, by finding a target receptor protein, and how L4 can suppress inflammation in vivo, as this could give us important insights into the mechanism of COPD progression and how it can be halted.”

The work was published in the American Journal of Physiology, Lung Cellular and Molecular Physiology. 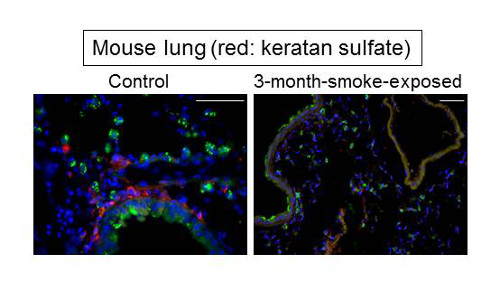 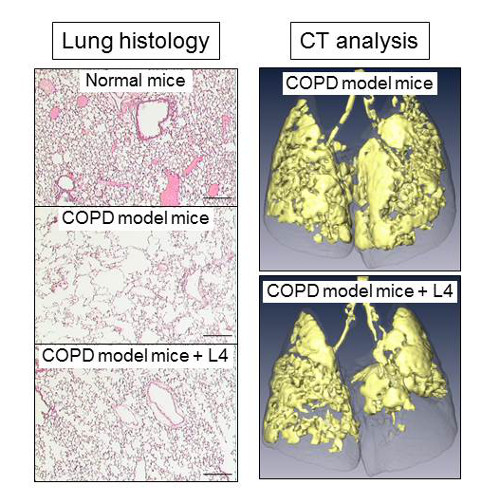 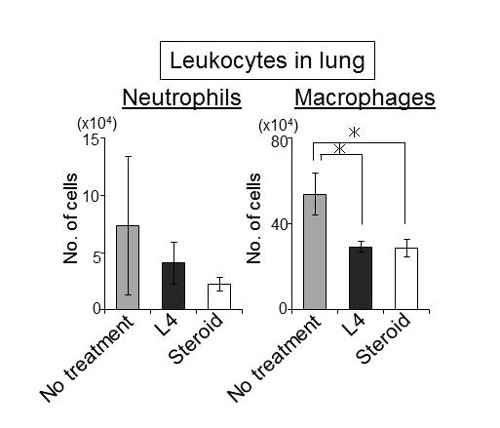