Fruit flies have a rich language of smell messages that they exchange, but now their secret is out. In a report published August 2 in Current Biology, scientists were able to tap into the communications among freely interacting flies using a bioluminescent technology to monitor their brain activity. They discovered that males signal their presence by placing droppings that act as a calling card for flies to find each other and even lure females to designated locations.

Many species from flies to mammals use signaling molecules called pheromones to attract mates and communicate socially. These pheromones may waft off the body or be excreted in urine, but now researchers at Japan's RIKEN Center for Brain Science have found that pheromone-laced fecal landmarks, rather than flies' bodies themselves, are strong attractors for fellow flies. In a small arena equipped for both visible light and thermal imaging, Drosophila flies could move around untethered. The researchers were interested in responses of both male and female flies to the male pheromone cVA, which activates only a specific class of odor-sensing neurons. In genetically-engineered flies, these neurons glow when activated thanks to the introduction of bioluminescent molecules similar to those in another familiar insect—fireflies. “This simultaneous neural and behavioral recording is the first for investigating social communication in such small organisms,” observes research group leader Hokto Kazama. “The fly environment is a rich landscape of pheromones changing over space and time and this kind of naturalistic observation can change our understanding of what drives flies’ behavior.”

Observing male flies in the arena, the researchers found that odor-sensing neurons were triggered most strongly by a particular place—confirmed to be the location of a dropping—rather than interactions between flies, whose bodies were thought to be the main if not the sole source of cVA. “We have seen cases where the odor-sensing neurons respond only after a marking,” says Kazama, “and the closer the flies are to these fecal landmarks, the more bioluminescence we see.” On their own in the arena, male flies will circle the perimeter and deposit droppings, with a tendency to re-visit and spend more time around the marked regions. Flies with blocked odor-sensing neurons didn’t show this attraction.

In another experiment with a male and female fly, the female’s droppings were not attractive. The male’s markings, on the other hand, were attractive to both sexes, even during courtship when a female is chased by a male. Fecal landmarks thus function as a social hub, indicating the identity of the marking fly and increasing mating chances.

The system for monitoring bioluminescence has applications beyond fruit flies. Any neural recording, especially of small animals, that would traditionally require wires or tethering can now harness the power of these glowing brains, giving researchers a real-time look at activity during social communication. “Emerging genome editing technologies combined with bioluminescent probes are giving us a powerful window into observing natural behavior and how it arises in the brain,” says Kazama. 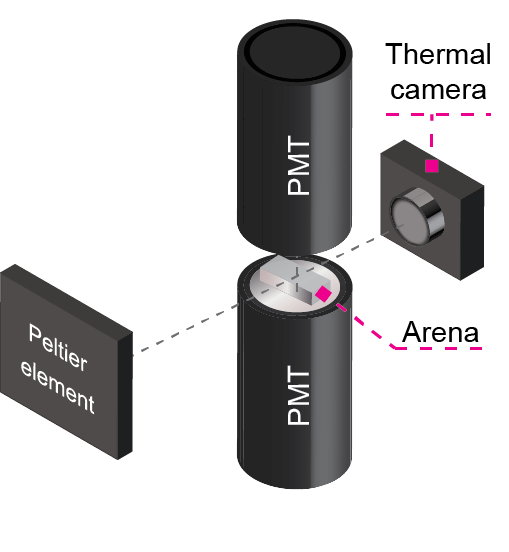 Setup for bioluminescence imaging of flies

Illustration of the bioluminescence monitoring system comprising photomultiplier tubes (PMTs) for neural recording and a thermal camera for behavioral tracking. A thermal wall composed of a cooled Peltier element and a plate improves the image contrast. 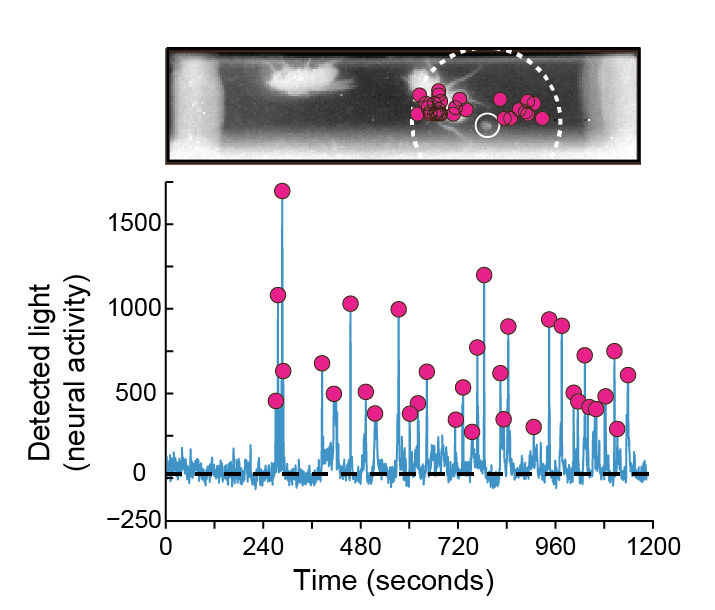 Landmark deposit by male fly and a female's response

Behavior of a paired male (blue) and a virgin female (red) before and after the deposition of a male landmark. The white dotted circle represents the putative effective region of a landmark. The video is sped up 5 times.