A self-powered heart monitor taped to the skin

Scientists have developed a human-friendly, ultra-flexible organic sensor powered by sunlight, which acts as a self-powered heart monitor. Previously, they developed a flexible photovoltaic cell that could be incorporated into textiles. In this study, they directly integrated a sensory device, called an organic electrochemical transistor—a type of electronic device that can be used to measure a variety of biological functions—into a flexible organic solar cell. Using it, they were then able to measure the heartbeats of rats and humans under bright light conditions.

Self-powered devices that can be fit directly on human skin or tissue have great potential for medical applications. They could be used as physiological sensors for the real-time monitoring of heart or brain function in the human body. However, practical realization has been impractical due to the bulkiness of batteries and insufficient power supply, or due to noise interference from the electrical supply, impeding conformability and long-term operation.

The key requirement for such devices is a stable and adequate energy supply. A key advance in this study, published in Nature, is the use of a nano-grating surface on the light absorbers of the solar cell, allowing for high photo-conversion efficiency (PCE) and light angle independency. Thanks to this, the researchers were able to achieve a PCE of 10.5 percent and a high power-per-weight ratio of 11.46 watts per gram, approaching the “magic number” of 15 percent that will make organic photovoltaics competitive with their silicon-based counterparts. They demonstrated a PCE decrease of only 25 percent (from 9.82% to 7.33%) under repetitive compression test (900 cycles) and a higher PCE gain of 45 percent compared to non-grating devices under 60 degree light angle.

To demonstrate a practical application, sensory devices called organic electrochemical transistors were integrated with organic solar cells on an ultra-thin (1 μm) substrate, to allow the self-powered detection of heartbeats either on the skin or to record electrocardiographic (ECG) signals directly on the heart of a rat. They found that the device worked well at a lighting level of 10,000 lux, which is equivalent to the light seen when one is in the shade on a clear sunny day, and experienced less noise than similar devices connected to a battery, presumably because of the lack of electric wires.

According to Kenjiro Fukuda of the RIKEN Center for Emergent Matter Science, “This is a nice step forward in the quest to make self-powered medical monitoring devices that can be placed on human tissue. There are some important remaining tasks, such as the development of flexible power storage devices, and we will continue to collaborate with other groups to produce practical devices. Importantly, for the current experiments we worked on the analog part of our device, which powers the device and conducts the measurement. There is also a digital silicon-based portion, for the transmission of data, and further work in that area will also help to make such devices practical.”

The research was carried out by RIKEN in collaboration with researchers from the University of Tokyo. 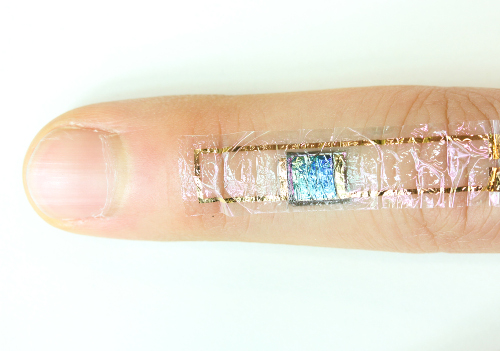 The flexible device on a finger