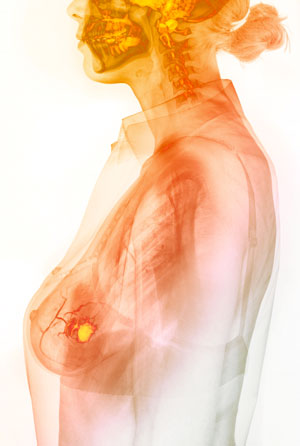 The fluorescent azide-based probe developed by Katsunori Tanaka and his team will help surgeons to quickly identify cancerous tissue (yellow region) from tissue samples taken during surgery, allowing them to save the rest of the breast. © GUSTOIMAGES/ SCIENCE PHOTO LIBRARY

Tanaka is an organic chemist who heads the RIKEN Biofunctional Synthetic Chemistry Laboratory, and he is fascinated by acrolein—a diminutive molecule made up of a mere eight atoms: three carbons, an oxygen and four hydrogens.

He says that its smallness has sometimes meant acrolein is neglected. “Many chemists think small molecules are too simple and prefer to investigate bigger, more complex molecules,” he explains.

However, acrolein’s small size belies its importance in a wide range of biological processes. A colorless liquid with an acrid odor, it is present in cigarette smoke and is given off by rotting fish and heated milk. Critically, acrolein is produced by ‘oxidatively stressed’ cells such as cancer cells, whose metabolism has gone awry so that they produce highly reactive and damaging oxygen species.

Tanaka’s latest discovery began with a minor miscommunication with a Russian student. RIKEN has a long-standing collaboration with Kazan Federal University in Russia, and Tanaka heads a joint laboratory between the university and RIKEN. One day he asked a Russian student to react acrolein with an amine, a nitrogen containing compound. “But she misheard me and trotted off to the lab to create a reaction between acrolein and another nitrogen-containing compound, azide,” Tanaka recounts. “Remarkably, the reaction happened!”

Initially, Tanaka was not particularly excited, because the reaction turned out to be a ‘click reaction’—a very rapid and specific reaction that joins two functional groups. “Many chemists use click reactions, so I thought it probably wasn’t that significant,” he says.

But Ambara Pradipta, a member of Tanaka’s laboratory, recognized the reaction’s potential when he saw oxidatively stressed cells start to fluoresce under ultraviolet light after an azide-based probe had been added. Since cancer cells are oxidatively stressed, this raised the possibility that it could be used to identify cancerous tissue. Furthermore, the reaction product remained inside these specific cells and did not stain their neighbors—a common problem with fluorescent probes that attach to cell surfaces.

RIKEN’s method owes some of its effectiveness to the fact that all cancer cells produce acrolein, which was a surprise to Tanaka. “We didn’t expect it, but it turns out that acrolein is found in all tumor tissues,” Tanaka says. “That is a very significant discovery.”

The researchers could simply add a few drops of the fluorescence-labeled phenyl azide probe to a tissue sample and it would enter the tissue’s cells and react with any acrolein inside. And since the reaction product is fluorescent, acrolein-containing cells become highly visible under a fluorescence microscope.

Globally, breast cancer is the most common cancer among women and causes more female deaths than any other cancer. Surgery is usually the first form of treatment. Often the whole breast is removed in a mastectomy, but breast-conserving surgery, which removes just the cancerous tissue, is often viable and is becoming an increasingly popular option.

In breast-conserving surgery, the surgeon determines which parts of the breast to remove by taking small tissue samples, which are analyzed under a microscope by a pathologist during the operation. The results show which tissues are cancerous, and the surgeon uses this information to guide the surgery.

But since this analysis is time consuming, usually taking between 40 and 60 minutes, an effective and faster method is highly preferable. Rapid methods based on techniques such as computed tomography, magnetic resonance imaging and fluorescent probes have been developed in the lab, says Tanaka. But these methods have not been adopted in the surgical theater because they cannot distinguish finely enough between different types of cancer cells. “It’s vital to emphasize that although several techniques have seemed promising in the lab, surgeons haven’t been interested in them because they don’t give the information they need for deciding where to cut,” he points out.

Timeliness and detail is where the fluorescent azide-based probe shows its most obvious strengths. By working with physicians at Osaka University Hospital, the team was able to use the probe to get the same information from breast tissue samples as the current conventional method, including different classifications of cancer cells, but in a fraction of the time—about 5 minutes. 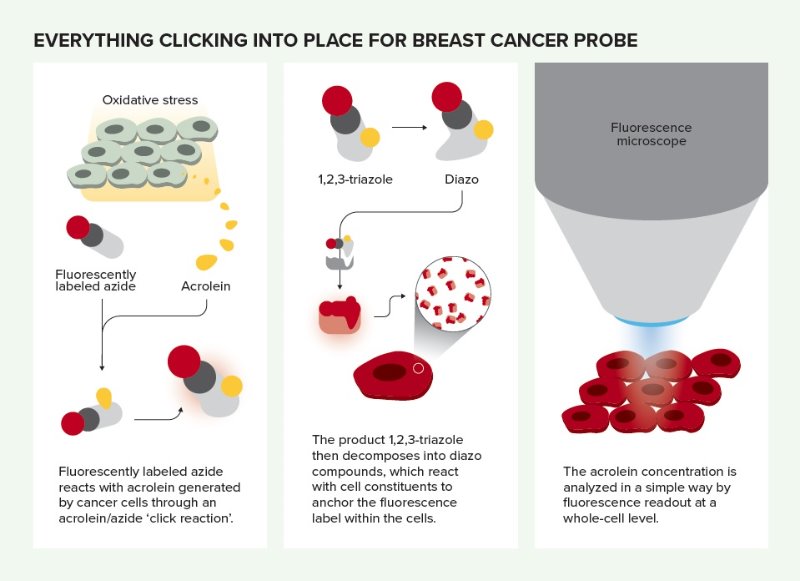 Everything clicking into place for breast cancer probe. © 2019 RIKEN

As well as being rapid, the method is very inexpensive, requiring just the azide-based probe and a fluorescence microscope. It can thus be used at small, regional hospitals. To help make this a reality sooner, Tanaka is very eager to develop a customized microscope that conforms to the strict regulations applied to surgical theater equipment, and he is currently talking to interested companies.

Tanaka says it is crucial to raise awareness of the method among surgeons, as he is convinced that they will quickly appreciate its benefits. And since acrolein is generated by all cancer cells, the azide-based probe could soon be developed further to shine a light on many other kinds of cancer tissues. 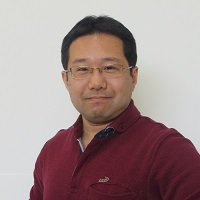 Katsunori Tanaka received his PhD (2002) from Kwansei Gakuin University, Japan, under the direction of Professor Shigeo Katsumura. After doing a post-doctoral fellowship with Professors Koji Nakanishi and Nina Berova at Columbia University (2002–2005), he joined Professor Koichi Fukase’s group at Osaka University. He moved to RIKEN as an associate chief scientist in the Biofunctional Synthetic Chemistry Laboratory in 2012. Among other positions, in 2017 he was appointed group director of the Max Planck–RIKEN Joint Center for Chemical Biology Research, a deputy team leader in the GlycoTargeting Research Laboratory, which is part of the RIKEN Baton Zone Program, and a chief scientist in the RIKEN Cluster for Pioneering Research.