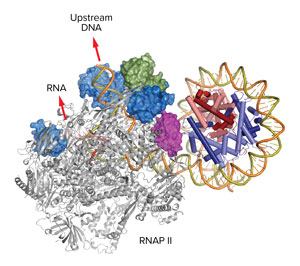 Figure 1: The elongation factors Elf1 (magenta) and Spt4/5 (blue and green) come between RNA polymerase II (RNAP II) and a nucleosome to ensure smooth transcription of DNA. From Ref. 1. Reprinted with permission from AAAS.

Two protein factors play a critical role in ensuring that transcription of DNA into RNA does not grind to a temporary standstill when it hits structures known as nucleosomes, RIKEN researchers have shown1. This finding has important implications for research into new strategies for treating diseases.

As you read this, an enzyme known as RNA polymerase II is busy transcribing genetic information stored in DNA into messenger RNA, much of which is then converted into proteins needed for various cellular processes in your body.

The familiar double helix of DNA is not arranged in straight lengths; rather, it is wrapped around spool-like structures known as nucleosomes, which are connected by short, linear sections of DNA. While this arrangement allows more compact storage of DNA than a linear structure, it complicates transcription because RNA polymerase II has to negotiate nucleosomes—the building blocks of chromatin—when it is transcribing.

“How RNA polymerase II manages to do this has been a long-standing question in cell biology,” says Shun-ichi Sekine of the RIKEN Center for Biosystems Dynamics Research (BDR).

When proteins called elongation factors are not present, the transcription of DNA by RNA polymerase II stalls at several locations within the nucleosome, a previous study by Sekine and collaborators had shown. 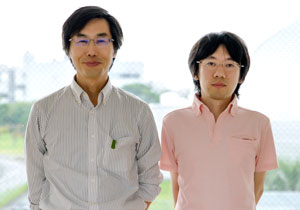 Now, they have identified two particular elongation factors—Elf1 and Spt4/5—that prevent RNA polymerase II from stalling. By examining the structures of Elf1 and Spt4/5, the team has also revealed some of their inner workings.

The researchers found that by itself Elf1 did not prevent transcription from stalling, while Spt4/5 had only a limited effect. But when both elongation factors were present, transcription proceeded unimpeded. “This was a very surprising finding,” says Haruhiko Ehara, also of BDR. “Especially for the small Elf1 factor, since very little was known about it.”

This information will be foundational for future research into diseases such as cancers that involve the improper transcription of genetic information. “By studying such structures we can gain a better understanding of disease mechanisms, which will provide valuable clues for drug development and other therapies,” says Sekine.