Using the RIKEN click reaction to weaponize antibodies against cancer 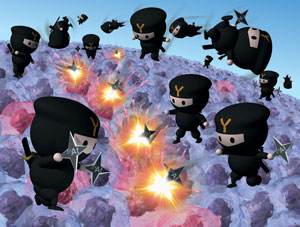 By using click reactions to add the alpha-emitter astatine-211 to an antibody, RIKEN chemists have developed a radioactive compound that can attack cancer cells. Republished with permission of the Royal Society of Chemistry, from Ref. 1; permission conveyed through Copyright Clearance Center, Inc.

RIKEN chemists have come up with a simple way to add a radioactive element to an antibody and have demonstrated that this produces a potent weapon against tumors in mice1.

Tumor-targeting therapy is sometimes referred to as ‘missile therapy’ by researchers in Japan, says Katsunori Tanaka, who heads the RIKEN Biofunctional Synthetic Chemistry Laboratory (BSCL). That’s because two components are needed: a guided missile and a warhead. In the case of radiotherapy, the warhead is a radioactive isotope that kills tumors by subjecting them to high doses of radioactivity.

Most isotopes used in radiotherapy are beta-particle emitters—that is, they give off electrons when they decay. But alpha-particle emitters, which release helium nuclei consisting of two protons and two neutrons, are much preferred since alpha particles are more than 7,000 times more massive than electrons. As a result, they travel far shorter distances before stopping, thereby minimizing collateral damage to healthy cells near a tumor.

To make an alpha emitter, Tanaka and Katsumasa Fujiki, also at BSCL, teamed up with physicists at the RIKEN Nishina Center for Accelerator-Based Science to use its world-class cyclotron facility to produce astatine-211. 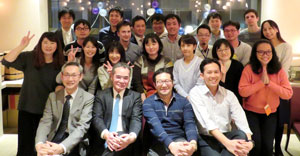 Katsunori Tanaka (front row, second from right), Katsumasa Fujiki (third row, directly above Tanaka) and their team have used the RIKEN click reaction to add the alpha-emitter astatine-211 to an antibody for radiotherapy against epidermoid cancer. © 2019 RIKEN

They then used a reaction they had previously developed, the RIKEN click reaction, to attach astatine-211 to antibodies to target skin cancer cells. The reaction is very attractive, having many advantages over conventional reactions. “Since it is a ‘one-pot’ reaction you don’t have to make each reaction, sequence of the reactions, and isolate each compound and then go to the next step,” says Tanaka. “We just take the components we need and mix them together.”

Furthermore, the RIKEN click reaction can be performed under mild conditions, which is important since the harsh conditions of conventional reactions can destroy antibodies.

With help from colleagues at the RIKEN Center for Biosystems Dynamics Research, the researchers demonstrated the effectiveness of their compound by using it to target skin cancer tumors in mice. They showed that it accumulated at tumors and suppressed their growth.

The team intends to investigate other vehicles for conveying astatine-211 to tumors such as glycoclusters. They are also keen to partner with medical researchers to bring the therapy to patients.