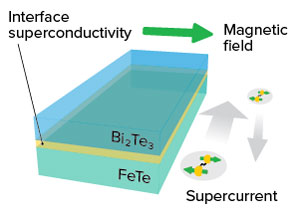 Figure 1: Topological superconductivity can arise at the interface between thin films of bismuth telluride (Bi2Te3) and iron telluride (FeTe). Reproduced from Ref. 1 and licensed under CC BY 4.0 © 2019 K. Yasuda et al.

An unusual form of superconductivity, which could help develop powerful quantum computers, has been found at the interface between two thin films by RIKEN physicists1.

Cooling a conventional superconductor below a certain critical temperature allows electric current to flow through the material without any resistance. This phenomenon occurs when electrons with opposite spins pair up.

A related effect called topological superconductivity relies on a different pairing, involving Majorana fermions. First predicted by Italian theoretical physicist Ettore Majorana in 1937, these particles are their own antiparticles, such that if two particles collide they will annihilate each other, releasing energy in the process.

Majorana fermions have never been identified as discrete particles, but their behavior is mimicked by the collective actions of other particles in excited states. For example, one form of Majorana fermion involves a combination of an electron and a ‘hole’—a gap, or missing electron, in a material’s electronic structure. If this kind of Majorana fermion could be controlled and manipulated in devices, its quantum states might be used to carry and process data.

“The edge of a topological superconductor is predicted to host Majorana fermions, which could be useful as ingredients of quantum computation in the future,” says Kenji Yasuda, who was at the RIKEN Center for Emergent Matter Science at the time of the study but is now at the Massachusetts Institute of Technology.

To better understand topological superconductivity, the researchers looked at the interface between two materials, bismuth telluride and iron telluride, where each film was less than 20 nanometers thick (Fig. 1).

When they cooled this system to −263 degrees Celsius—just 10 degrees above absolute zero—it started to behave as a superconductor. At the same time, the researchers saw evidence that the topological nature of superconductivity at the interface was involved in an effect called nonreciprocal charge transport, meaning that the electrical resistance of the material depended on the direction of the current flowing through it.

“Electrons in the surface state have their spins locked at right angles to their direction of motion,” explains Yasuda. “This study has demonstrated that the interplay between this phenomenon and superconductivity is the origin of the nonreciprocal charge transport.”