Modeling the insides of a neutron star 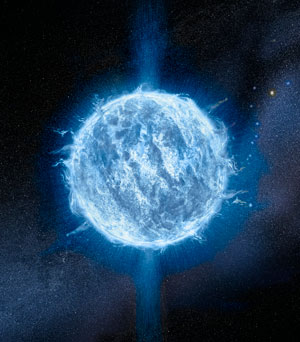 Figure 1: An artist’s impression of a neutron star. Astrophysicists at RIKEN have developed an improved model for the internal structure of a neutron star and are currently applying it to neutron star mergers. © HENNING DALHOFF/SCIENCE PHOTO LIBRARY

RIKEN astrophysicists have developed an improved model for the interior structure of neutron stars that agrees well with observations1. Unlike previous models, it can be extended to consider what happens when two neutron stars merge.

The collapsed remnants of giant stars, neutron stars are fascinating objects. They are a mere 20−30 kilometers in diameter but are nearly 400,000–600,000 times more massive than the Earth, which makes them incredibly dense.

Neutron stars are not uniform agglomerations of neutrons—like the astrophysical equivalent of a giant atomic nucleus containing only neutrons. Rather they have an onion-like structure. Theorists have been busy trying to model this internal structure based on quantum mechanics and data from observations.

Previously, Tetsuo Hatsuda of the RIKEN Interdisciplinary Theoretical and Mathematical Sciences Program and his co-workers had developed a model that consists of three layers: an outer layer made up mostly of neutrons, an inner core consisting of quarks—the building blocks of neutrons—and a transitional region between these two layers.

Now, Hatsuda’s team has taken this model a step further by using a more general equation to describe the outer layer, which is made up of about 97% neutrons and 3% protons and electrons.

The improved model agrees well with observational data obtained so far. For example, it predicts that the maximum mass of neutron star is 2.35 times that of the Sun, which is close to the mass of the largest neutron star observed so far—that produced by the merger of two neutron stars, which was observed by gravitational waves in 2017.

But the real test of the model is expected soon. NASA’s Neutron star Interior Composition Explorer (NICER) telescope is performing x-ray observations to measure the sizes of neutron stars of known masses. Its measurements will either confirm or disprove Hatsuda’s model.

“It’s a very exciting time to be working on neutron stars,” notes Hatsuda. “Theory is advancing well, there are gravitational-wave detections, and NICER is expected to pin down the radius of neutron stars.”

This general nature of the team’s model makes it applicable not just to solitary neutron stars but also to the merger of two neutron stars. “The old equation of state for the outer layer only applied to a temperature of absolute zero,” explains Hatsuda. “That’s fine for single neutron stars since they are very cold, but a neutron star merger generates a lot of heat, which is why we incorporated our new equation of state that can cope with finite temperatures.” The team is now using it to model these mergers and to obtain predictions about the gravitational waves they will generate.