Electron–electron and spin–orbit interactions compete to control the electron 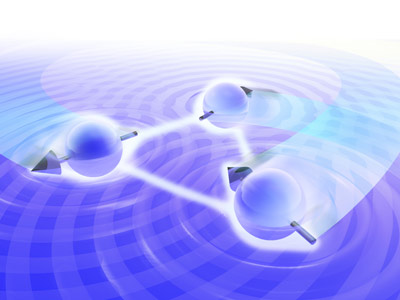 Figure 1: Electron spin is influenced by both the electron’s motion, via spin–orbit coupling, and interactions with other electrons, through the Coulomb effect. (Image prepared by Ms. Mari Ishida of RIKEN.) © 2021 Mari Ishida; RIKEN Center for Emergent Matter Science

In a finding that will help to identify exotic quantum states, RIKEN physicists have seen strongly competing factors that affect an electron’s behavior in a high-quality quantum material1.

Electrons have a property called spin, which can be crudely thought of as the rotation of an electron about an axis. As an electron moves, its motion and spin can become linked through an effect known as spin–orbit coupling. This effect is useful because it offers a way to externally control the motion of an electron depending on its spin—a vital ability for an emerging technology called spintronics, which is seeking to use electron spin to realize low-power-consumption information processing.

Spin–orbit coupling is a complex mix of quantum physics and relativity, but it becomes a little easier to understand by envisioning a round soccer ball. “If a soccer player kicks the ball, it flies on a straight trajectory,” explains Denis Maryenko of the RIKEN Center for Emergent Matter Science. “But if the player gives the ball some rotation, or spin, its path bends.” The ball’s trajectory and its spinning motion are connected. If its spinning direction is reversed, the ball’s path will bend in the opposite direction.

“This interplay has recently attracted a lot of interest, since it could lead to the emergence of novel electronic and spin phases, which may be used in future quantum technologies,” says Maryenko. “It is thus important to understand the fundamentals of the interplay.” But it is incredibly difficult to identify both effects at the same time.

Now, Maryenko and his colleagues have succeeded in disentangling the two effects.

They looked at electrons trapped between two semiconductors, magnesium zinc oxide and zinc oxide. Since the system had very few atomic impurities, there was a strong interaction between electrons. And the researchers could control the strength of the spin–orbit coupling by varying the magnesium content. “We looked carefully at how the sample resistance changed when we applied a magnetic field,” says Maryenko. In this way, they were able to identify signatures of both spin–orbit and the mutual repulsion due to the electrons’ charges.

This high-quality material system thus represents a great resource for testing theoretical predictions and it opens a path to develop spintronic phenomena in strong-electron-correlation regimes.