Observing the life cycle of skyrmions in exquisite detail 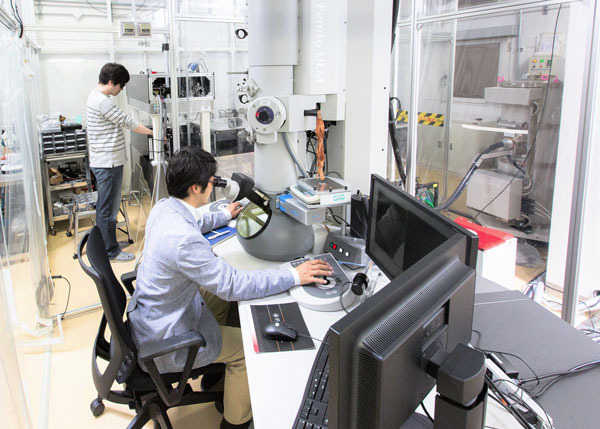 For the first time, an all-RIKEN team has watched the entire life cycle of tiny magnetic whirlpools, revealing their birth, movement and death1. This will be important for informing the development of future low-power memory devices based on these magnetic swirls.

First observed experimentally in 2009, skyrmions are formed when the magnetic fields of a material’s atoms organize into whirlpool-like structures. Skyrmions can drift around as if they were particles and are promising for conveying data in low-power computer chips and memory devices.

Researchers have previously studied how skyrmions behave during individual stages of their lives. But these events typically take place at vastly different timescales—from less than a nanosecond to many microseconds—and at lengths spanning from nanometers to micrometers. That has made it difficult to follow a skyrmion over its whole life and to understand how multiple skyrmions interact over that time.

“This behavior would directly determine the performance of skyrmion-based memory devices,” notes Takahiro Shimojima of the RIKEN Center for Emergent Matter Science (CEMS).

Now, Shimojima and six CEMS colleagues have studied skyrmion over their entire life times in a thin film of cobalt zinc manganese.

Since skyrmions can typically live for over a year in this magnetic material, the team seeded the film with gallium ions, introducing random defects that curtailed the skyrmions’ lives. “That enabled us to observe the skyrmion’s whole life cycle,” Shimojima says. “It also better mimics the imperfect materials that would be used in practical skyrmion-based devices.”

The team put the film in a magnetic field and studied it using an electron microscope and two lasers capable of firing nanosecond pulses of light. The first laser excited the sample to generate skyrmions, before the second laser triggered a burst of electrons in the microscope to probe the skyrmions.

“This information should help us understand the factors that could limit the performance of skyrmion-based devices,” Shimojima says. The experiments also demonstrate how defects in magnetic materials could be used to control skyrmions in such devices.

The team now hopes to develop next-generation magnetic memory devices by exploiting their new-found ability to realize rapid and repeatable control of skyrmions.