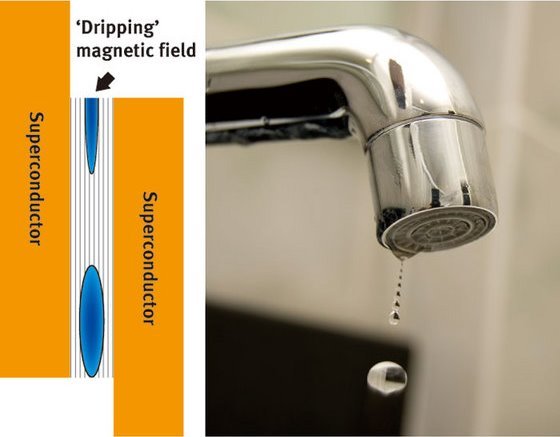 Figure 1: Dripping faucets. The schematic diagram (left) shows how quanta of magnetic flux (blue ellipses) first form and then successively slide down between stacks of Josephson junctions between by two high-temperature superconductors (orange). The process is similar to a dripping water faucet (right). See also http://dml.riken.jp/MQT/mqt.swf

Now, a team of researchers from RIKEN’s Frontier Research System in Wako and the University of Michigan has established a theory that describes tunneling across Josephson junctions of layered high-temperature superconductors1. Until its recent experimental demonstration, this process was considered to occur only in conventional superconductors and be suppressed in high-temperature ones, as the latter show fundamentally different properties.

A complex quantum theory developed by the researchers now explains these observations. “The tunneling of a magnetic flux quantum has a close analogy with water dripping from a tap,” explains Franco Nori, who is part of the team. If a tap is not turned off tightly, water slowly leaks out and forms a droplet. As soon as a critical mass is reached, the droplet falls (Fig. 1).

A similar effect occurs in layered superconducting materials. When the externally applied electric current across the Josephson junction is far below the maximum superconducting current, the ‘droplets’ of magnetic flux quanta cannot pass through the junction: the tap is closed. However, sufficiently high external currents can result in the leakage of magnetic flux quanta, says Sergey Savel’ev from the RIKEN team. “As soon as a flux quantum is created, it passes through the junction, just like a falling drop of water.”

According to Nori, the discovery of this novel behavior could have practical implications. “These results could open a new avenue of using such high-temperature layered superconductors for quantum electronics applications,” he says. In particular, such structures could be used as sensitive read-out devices for superconducting quantum computers.

While such applications will not be realized in the near future, the theory proposed by the researchers offers a fundamentally new view into the subtle interactions between magnetic flux quanta and the superconducting state.