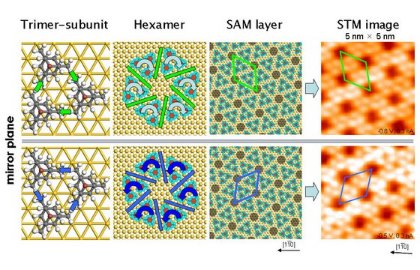 Figure 1: Views of the hierarchical chiral assembly of the adamantane derivative on a gold surface—from molecule to microscopy. JACS/American Chemical Society/129 (2007)

A new, self-assembled monolayer (SAM) of cage-like compounds could provide a route to new molecular electronic devices. The SAM, formed from a layer of functionalized adamantane—a chemical compound known as a cycloalkane with three linked rings, was prepared on a flat gold surface by a team of Japanese researchers. Studies of the SAM show that there is a high level of organization of the adamantanes which means this SAM could be a starting point for devices to measure molecular conductivity.

As devices to measure molecular conductivity could be incorporated into new technologies in the future they attract much attention by scientists. Now, Yousoo Kim from the RIKEN Discovery Research Institute in Wako, and colleagues from several other Japanese research organizations, have developed a method that creates a regular yet complex pattern across a surface capable of this behavior.

The team used molecules of bromo adamantane trithiol on gold. These adamantane derivatives have a cage structure with a tripod base allowing it to stand proud of the surface. The tripod is formed from three thiol feet with the chemical formula CH2SH that bond to the metal surface, by replacing the S–H bonds with S-metal bonds; a delicate procedure that requires careful handling to avoid destroying the molecules.

Using scanning tunneling microscopy (STM) the SAMs were found to be organized into a two-tiered hierarchy. The cages arrange into trimers that are chiral—structurally specific mirror images—and each trimer then forms hexagons with the chirality passed on (Fig. 1). Two possible chiral forms can be formed and STM measurements show that both exist.

This study is the first to demonstrate that a molecule with no chirality can make chiral SAMs in a hierarchical manner1. The chirality is believed to result from the CH2 fragments of the tripod feet owing to a slight mismatch between the surface bonding points and the arrangement of the groups on the cage molecules.

Modification of surfaces by chiral molecules opens a promising path to develop biosensors at the single molecule level. “We can design a variety of functional groups on the adamantane cage, and this provides us with a good chance to measure electric conductivity of individual molecules,” says Kim. The team is now investigating the effect on molecular conductance by altering the functional groups and looking at fixing bigger molecules on the gold surface.