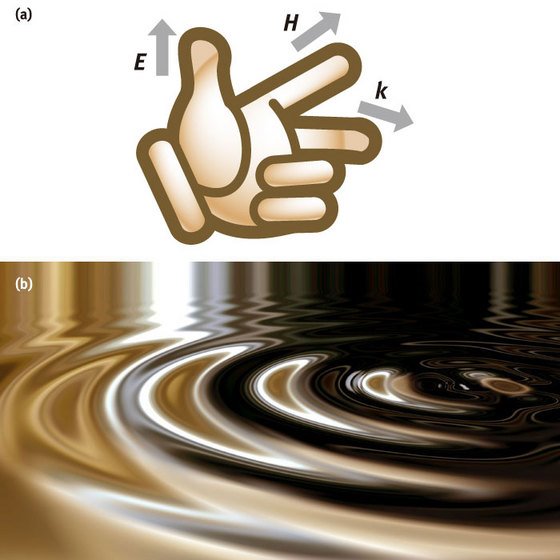 Figure 1: (a) Contrary to the usual right-handed media, the electric (E ) and magnetic (H ) components of a surface wave propagating along k can be constructed with the fingers of the left hand. (b) Two-dimensional electromagnetic surface waves can be seen as waves on the surface of water.

Civilization is based on our ability to shape and functionalize natural materials. Yet the laws of physics allow for much broader possibilities. Lenses, for example, are typically made of glass, but there are limits to the size of the objects they can resolve. Only recent progress in the design of artificial, so-called ‘left-handed’, materials has enabled the fabrication of ‘superlenses’ with no limit on the achievable resolution.

Now, a team of researchers from the RIKEN Frontier Research System in Wako and the University of Michigan has shown theoretically that both three-dimensional and two-dimensional electromagnetic waves traveling on the surface of a material (Fig. 1b) can be left-handed. Their work is reported in Physical Review Letters 1. “Even though surface electromagnetic waves were studied intensively, as far as we know nobody has paid attention to some of the interesting analogues to three-dimensional waves,” explains Franco Nori, a member of the research team.

Using the fundamental set of equations that describes the behavior of electromagnetic waves, Maxwell’s equations, the team studied the properties of two-dimensional waves at the interface of two natural materials. This could be a metal in air, or the boundary between a metal and an insulating or left-handed material. The researchers show that when natural materials of suitable electric and magnetic properties are combined, electromagnetic waves at the interface between the two materials possess left-handed properties.

While there are a number of practical issues that need to be overcome, such as energy losses causing the dampening of the waves, Sergey Savel’ev from the team is convinced that these results “open new perspectives for optical devices with unprecedented properties”. Superlensing, for example, could enable the miniaturization of optical lenses, with important implications for telecommunications applications. On a more general level, these theoretical findings demonstrate that some of the exciting three-dimensional features of left-handed materials can be preserved in a two-dimensional environment.