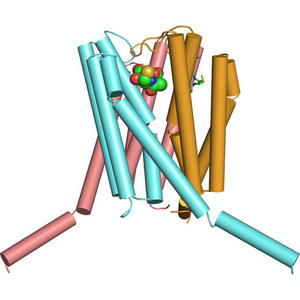 Figure 1: The crystal structure of the trimer of the enzyme, leukotriene C4 synthase, binding a small, natural compound, points to how drug molecules could be designed to bind in a similar fashion.

The structure of a complex, human protein that has been uncovered by collaborators from Japan and the US could lead to new treatments for chronic inflammation illnesses such as asthma.

Good anti-inflammatory drugs are essential for the treatment of chronic conditions such as asthma and anaphylaxis, in which the lungs are severely restricted—sometimes fatally. According to the World Health Organization, it is estimated that as many as 300 million people worldwide suffer from asthma, so effective treatments are imperative.

Now, a research team led by Hideo Ago at the RIKEN SPring-8 Center in Harima, in collaboration with K. Frank Austen at the Harvard Medical School and Division of Rheumatology, Immunology, and Allergy in Massachusetts, has solved the crystal structure of LTC4S which shows the enzyme as a trimer (Fig. 1). Their work provides a breakthrough to scientists and opens the door to structure-based design of possible drug compounds.

From the crystal structure, published in the journal Nature 1, Ago and colleagues can now also look more closely at the biological function of the enzyme and its mechanism in cells. This significant achievement was not without challenges. The team also had to develop a way of producing the active human enzyme in sufficient quantities to form crystals for study. This was done using a recombinant technique—a procedure that allowed large quantities of LTC4S to be produced using fission yeast instead of human cells.

The research program to date has involved the work of eight scientists over four years from both institutes. Ago explains that the next step in this research will be to use this new crystal structure to screen, using computers, potential drug candidates for effective inhibitors of the enzyme. This approach may lead to better therapeutic drugs. The group will also study similar biological systems that produce active compounds.

Ago is very optimistic about the future. “In the new project, the technical know-how established through the study on LTC4S will be a great help,” he says.