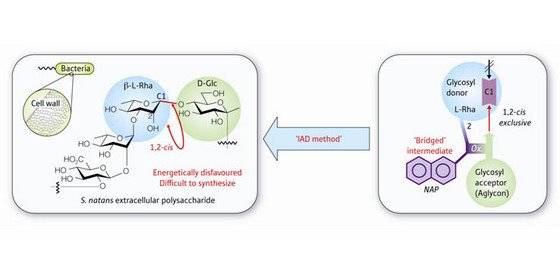 Glycocongugates—carbohydrates that are chemically linked to another compound—constitute biologically important molecules. The two parts of the glycocongugate are joined by what is known as a glycosidic linkage of which there are several types. Each type of linkage results in a different spatial arrangement of the two components but it is the selection of the linkage and the resulting spatial configuration that is critical for a glycoconguate’s biological activity within a larger molecule.

Yukishige Ito, Yong Joo Lee and Akihiro Ishiwata from the RIKEN Advanced Science Institute (formerly the Discovery Research Institute), in Wako, have now developed a method to selectively synthesize a glycocongugate, β-L-rhamnopyranoside, an important constituent of polysaccharides in bacteria, such as Sphaerotilus natans, that stimulate an immune response1.

Although a number of new methods for glycosidic linkages exist, they are often unselective or able only to link a limited range of compounds, aglycons, to the carbohydrates. In addition, the synthesis of one specific linkage, known as a 1,2-cis linkage has been particularly challenging. It is this 1,2-cis linkage that is present in β-L-rhamnopyranoside.

Ito and colleagues proposed a new approach to the synthesis of β-L-rhamnopyranoside. The approach exploits the use of 2-naphthylmethyl (NAP) ether to form a temporary linkage between the carbohydrate and the aglycon as a bridge compound. This bridge brings the two components into close proximity and then an intramolecular reaction forms the desired glycocongugate (Fig. 1). Similar methods have been applied to the synthesis of other complex saccharides.

“This approach had been expected to be a promising method to get 1,2-cis isomer, however, there were some problems to overcome,” explains Ito. The technique, known as intramolecular aglycon delivery (IAD), is necessarily a two-step reaction and so the yield of each step needed to be optimized. Also, the bridge compound could link two carbohydrate compounds or two aglycons together giving an unproductive intermediate.

Following optimization of the reaction, the team successfully used the IAD technique to selectively form the 1,2-cis linkage to produce β-L-rhamnopyranoside without using an excess of the substrates. They also found that a wide range of aglycons could be used demonstrating a general use for this reaction.

Overall, Ito and colleagues’ study to improve synthetic methods for unusual glycoside linkages has been ongoing for over a decade. This latest advance means that the team can now go on to synthesize other important polysaccharides, that also include the important 1,2-cis linkages, and further investigate their biological significance.