Missing piece gets a work over 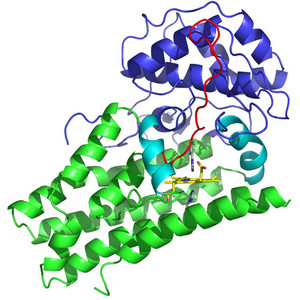 Figure 1: An illustration of the crystal structure for Indoleamine 2,3-dioxygenase (IDO) bound to an inhibitor molecule.

Researchers working in Japan have developed a new theory that may explain the activity of two unusual, but vitally important, enzymes that were discovered over 40 years ago.

The enzymes, indoleamine 2,3-dioxygenase (IDO) and tryptophan 2,3-dioxygenase (TDO), known as dioxygenases, are responsible for the cleavage of the essential amino acid, L-tryptophan. Both enzymes contain heme—a metal-containing organic ring structure—to which molecular oxygen is bound before being transferred to L-tryptophan. This important oxidation reaction releases energy into the body in all cells in mammals, but its mechanism is little understood.

Now, Hiroshi Sugimoto and colleagues at the RIKEN SPring-8 Center, Harima, in collaboration with Keiji Morokuma, Lung Wa Chung and colleagues at Kyoto University, have studied the structures of these enzymes and modeled some potential reaction pathways to better understand how they work1.

Recently, crystal structures of IDO (Fig. 1)2 and TDO with tryptophan or similar compounds were obtained. Surprisingly, these structures showed different active sites for these enzymes compared to other heme systems. Consequently, the researchers concluded that different mechanistic pathways must also be operating for the dioxygenase reaction.

The researchers used a detailed modeling method, called Density Functional Theory, to calculate and evaluate the energy of the starting compounds, products, possible reaction intermediates and transition states. They then used comparisons to provide insight into which reaction pathways are the most energetically favorable and, therefore, which mechanism is most likely to take place in the body.

They found that one proposed mechanism involved a highly distorted transition state, which would lead to a very high energy barrier, making this route doubtful. Instead, they suggest that a new and energetically favorable mechanistic pathway explains the unusual dioxygen activation and oxidation reactions for the enzymes. This proposed mechanism is sharply distinct from other mechanisms for heme-containing oxygenases.

The enzyme-bound oxygen was found to react directly with the electron-rich indole carbon on the tryptophan via either a 2-electron (electrophilic) or 1-electron (radical) transfer pathway. Either of these reactions would lead to the formation of a low-energy intermediate making it a much more realistic possibility. Sugimoto and colleagues are now investigating exactly how oxygen binds to the heme and evaluating the contribution of the enzyme to the mechanism.

“[The research] might also be informative for rational drug design because IDO is emerging as an important new therapeutic target for the treatment of cancer, chronic viral infections, and other diseases characterized by pathological immune suppression,” says Sugimoto.