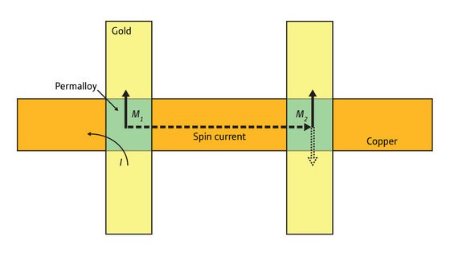 A team of scientists in Japan has demonstrated the possibility of switching the magnetization of a thin magnetic film with a non-conventional and innovative method, achieving a considerable step forward in magnetic data storage and the field known as spintronics.

In magnetic memory devices, information is stored in magnetic elements and typically retrieved by applying a small, external magnetic field. More convenient, however, is the use of a spin-polarized current, in which moving electrons exert a torque on a magnetic element and can switch the direction of its magnetization.

Unfortunately, moving electrons can give rise to electrical noise, which reduces the efficiency of the magnetization control. Now, Yoshichika Otani from the RIKEN Advanced Science Institute in Wako and colleagues have overcome this problem by using a pure spin current1, that is, a diffusion of electron spins without charge motion.

A spin current can be created by the process known as non-local injection: a current is injected into a junction between a metal and a magnetic layer (Fig. 1). When the magnetic element is magnetized, such as a metallic film, electron spins accumulate at the junction, and then diffuse away from the junction to re-equilibrate the spin population in the film. The trick is to then use this spin current to influence the magnetization of another magnetic element placed far from the accumulation point.

Previous attempts to create a pure spin current in this way have all met with limited success. Otani and co-workers therefore focused on optimizing the quality of the interface. In particular, they grew all the layers of their devices in sequence in a single high-vacuum chamber. This prevented possible contamination that could occur while moving a structure between growing chambers.

By examining the electronic transport properties of their device, the researchers were able to demonstrate that when the current injected into the first junction is high enough, it creates a spin current high enough to reverse the magnetization at the second junction. Most importantly, the magnetization can be reversed back by applying the same amount of current in the opposite direction.

Magnetization control using a pure spin current in this way in the high-quality devices fabricated by the team could lead to the realization of very advanced electronic devices. The team believes, for example, that it will be possible to achieve different types of transistors—which have no analogues in current electronics—based only on electron spin.