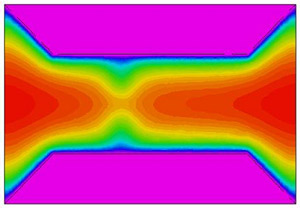 Figure 1: A graphical representation of the calculated electrostatic potential on the surface of liquid helium within a constricted passage on a silicon chip. Red colors indicate regions of lower energy. © 2011 David Rees

The multibillion dollar computer industry hinges on the ability to efficiently pass an electric current through a material. However, in any electronic device such as a computer transistor, the influence of the material's atoms inevitably masks the interactions between the electrons. Using a custom-designed system, a research team from the RIKEN Advanced Science Institute, Wako, in collaboration with colleagues from the University of Konstanz, Germany, has completed the first study of the transport of single floating electrons free of external influences1.

Trapping electrons outside of matter and keeping them in order is difficult, but liquid helium is ideally suited to the task. Electrostatic charges in the liquid can attract electrons towards its surface but, owing to a lack of energy, the electrons cannot penetrate the surface and enter the liquid. Instead, caught between these competing influences, the electrons hover above the liquid helium, forming a two-dimensional electron system. “This is a unique system for studying the fundamental properties of electrons, as the electrostatic interactions between them are effectively unscreened,” says team member David Rees.

To measure the transport properties of this liquid-like system of electrons, the researchers fabricated a channel on the surface of a silicon chip that they filled with liquid helium. In one location, they physically narrowed the width of this channel and applied an electric field across the constriction, which provided further control over the effective channel width using electrostatic forces (Fig. 1).

In addition to confirming the importance of electrostatic repulsions, these experiments open the door to further fundamental studies of electron behavior. If cooled to temperatures below one degree above absolute zero, the randomly floating electrons would arrange into a periodic and ordered array. This could provide the first opportunity to investigate the dynamics of a crystalline electron system, rather than a disordered liquid passing through a narrow constriction.

This model system of strongly interacting electrons may have other roles to play. According to Rees and team leader Kimitoshi Kono, if applied to other systems where the interactions between particles are strong, these findings could be used to understand the transport of particles such as ions in biological organisms.