Stopping malignancy in its tracks 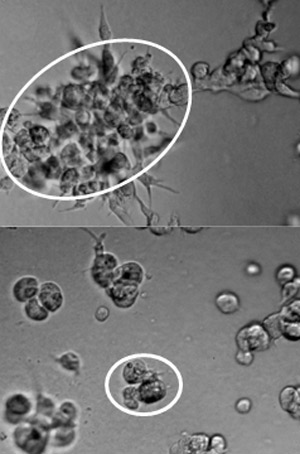 Figure 1: Cancer cells normally form colonies (top), but not when newly discovered natural product fusarisetin A is added to the culture (bottom). Reproduced, with permission, from Ref. 1 © 2011 American Chemical Society

An unusual chemical compound isolated from a mud-dwelling fungus found in a soil sample collected in Daejeon, South Korea, could lead to a new family of antitumor drugs. Discovered by teams led by Jong Seog Ahn at the Korea Research Institute of Bioscience and Biotechnology (KRIBB), Ochang, and Hiroyuki Osada at the RIKEN Advanced Science Institute, Wako, the compound prevents cancerous cells from forming mobile colonies—the point at which cancers become malignant and spread through the body1. The teams began collaborating after Yukihiro Asami from RIKEN joined KRIBB.

The researchers spotted the compound while searching extracts of the fungus for candidate drug compounds using a recently developed screen called a 3D epithelial culture system. To date, this kind of biological assay has rarely been used to search for natural products with novel bioactivity, says Ahn. It was during the 3D screen, which they spiked with cancerous cells, that the researchers realized that a compound produced by the fungus was inhibiting the cancer cells from clumping together to form colonies (Fig. 1). This type of screen is difficult using a conventional two-dimensional cell culture.

The researchers isolated the bioactive compound and named it fusarisetin A. They then investigated its structure using an array of chemical characterization techniques, including nuclear magnetic resonance (NMR) and x-ray crystallography. They showed that fusarisetin A was a previously undescribed compound. Being able to grow crystals of the compound for x-ray studies was a breakthrough, says Osada. “It is very important for exact structural elucidation to get crystal analysis,” he says.

Having established that fusarisetin A is a new compound, the researchers probed its bioactivity in more detail. They showed that it simply blocks colony formation rather than killing cancer cells. They then compared the compound to others known to inhibit this process, and showed that it works differently to other compounds capable of blocking clumping. This suggests to the researchers that it could offer a new way to treat tumors.

The team is already working to discover how fusarisetin A inhibits the clumping of cancerous cells by looking for its molecular target. “We have already got candidate target proteins,” Osada adds.