Resolving controversy at the water’s edge 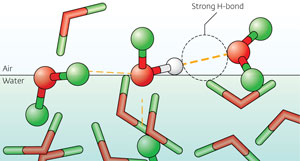 Water (H2O) has a simple composition, but its dizzyingly interconnected hydrogen-bonded networks make structural characterizations challenging. In particular, the organization of water surfaces—a region critical to processes in cell biology and atmospheric chemistry—has caused profound disagreements among scientists. Now, Tahei Tahara and colleagues from the RIKEN Advanced Science Institute in Wako, in collaboration with researchers in Japan and Europe, have uncovered the presence of strongly bonded water pairs at the air–water interface1, rather than previously hypothesized ‘ice-like’ surface structures.

Other VSFG experiments, however, have suggested that the two vibrations arise from one structure undergoing coupling interactions. To resolve this dispute, Tahara and colleagues turned to heterodyne-detected VSFG (HD-VSFG), a high-level spectroscopic method that detects how the phase of the vibrational signals shifts with respect to the incident laser beam—information that can pinpoint molecular orientation at interfaces.

The researchers then employed a trick using isotopes to account for coupling effects of water molecules: they added the deuterium (D)-bearing compounds HOD and D2O to pure water. By gradually diluting the number of oxygen–hydrogen (OH) bonds in the liquid, these isotopes suppress the interactions between the vibrational modes that normally occur. The remaining ‘stretching’ vibrations that extend and contract OH bonds then provide clear information about the interfacial water structure.

The team’s experiments revealed that as the isotopic dilution progressed, the two OH bands merged into a single peak, which is clear evidence of vibrational coupling within a single structure. After performing molecular dynamic simulations and comparing the results to the HD-VSFG data, a new picture emerged of the air–water interface (Fig. 1): the low-frequency OH vibrations were due to tightly joined pairs of liquid water molecules.

“We were wondering what kind of structure can have strong hydrogen-bonds other than ice at water surfaces,” says Tahara. “When our experiments and [co-author] Morita’s simulation answered the question, rather than surprise I felt that ‘This is it!’ because its structure is quite reasonable.”