Uncovering the gene for a rare skeletal disease 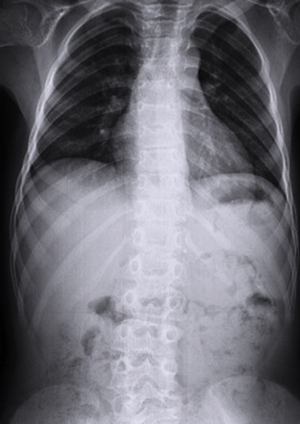 The hereditary disease known as brachyolmia is characterized by a short stature and various bone abnormalities that start becoming apparent in late childhood. The vertebrae take on a flattened shape, with irregular spacing between the spinal discs (Fig. 1). This rare skeletal disease can be caused by dominantly inherited mutations in the gene TRPV4, but there are also more than a few recessive forms of brachyolmia for which the genetic cause has been a mystery—until now.

Reporting in the Journal of Medical Genetics, researchers in Japan have pinpointed the gene responsible for recessive brachyolmia1. By sequencing the entire protein-coding regions of the genome of a young Turkish girl with the disease and two of her affected family members, the scientists found that an insertion in the PAPSS2 gene was the causative mutation.

The team, led by Shiro Ikegawa, an expert in the field of bone and joint diseases at the RIKEN Center for Genomic Medicine in Tokyo, also examined the DNA of three more children—two from Japan and one from Korea. All three had forms of brachyolmia that clinically mirrored those found in the Turkish family, and all three had loss-of-function mutations in both copies of their PAPSS2 gene, which encodes an enzyme involved in the formation of cartilage proteoglycan. “This finding indicates that brachyolmia caused by the PAPSS2 mutation is not unique to the Turkish family but a universal disease potentially common among different populations,” Ikegawa says.

Mutations in the PAPSS2 gene have been found occasionally in other bone growth disorders with autosomal recessive inheritance patterns. For example, researchers in the United States previously identified such mutations in a large, inbred Pakistani family with a form of spondyloepimetaphyseal dysplasia, another disease marked by short stature and other skeletal disorders. More recently, clinicians from Western Europe have described a girl of Turkish origin with PAPSS2 sequence variants who suffered from precocious puberty and bone problems, although her skeletal defects were far milder than those found in other people with mutations in the same gene.

The finding that the six people with brachyolmia studied by Ikegawa’s group had overlapping, but distinct, clinical features compared to the individuals with these other PAPSS2-associated diseases suggests that the loss of this key gene can lead to a gradient of disease states. “One gene mutation sometimes presents with a variety of phenotypes,” says Ikegawa. “The task now is to explain on a molecular scale why this happens with this particular gene.”