Getting ahead of the curve 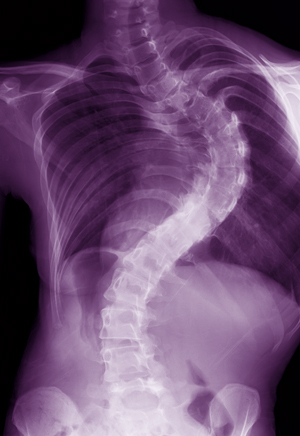 Adolescent idiopathic scoliosis (AIS) is the most common pediatric skeletal disease, causing complex rotational deformity of the spine in approximately 2% of school-age children worldwide. Recent studies have implied that AIS may, at least in part, be caused by genetics, but the pathogenesis of AIS still remains poorly understood. An international research team led by Shiro Ikegawa from the Laboratory for Bone and Joint Diseases at the RIKEN Center for Integrative Medical Sciences has now identified another gene that may contribute to AIS by altering spinal development1.

Kou also determined that the SNP is located in the gene GPR126, which encodes a receptor protein. GPR126 is known to be associated with the development of the sheaths that insulate nerve fibers, but its other functions are largely unknown. By examining the tissue-specific expression of GPR126, the researchers found that it is expressed in spinal cartilage, implying a role in the development of the spine.

Using zebrafish, Long Guo and Chisa Shukunami who joined Ikegawa’s team from Kyoto University knocked down GPR126 expression to investigate the role of the gene in vertebrate development. They found that zebrafish with lower levels of the GPR126 protein had shorter bodies and their vertebrae showed delayed bone formation, or osteogenesis. “Our zebrafish knockdown studies indicate the importance of GPR126 in bone tissue growth and formation, and raise the possibility that abnormal spinal development and growth induce AIS,” explains Kou.

GPR126 is also known to be associated with shorter trunk length and reduced height in European populations, which coincides with the new findings. “Their associations are in the same direction; the susceptibility allele is the same for both AIS and shortened trunk,” says Kou.

Although the identification of GPR126 sheds new light on the pathogenesis of AIS, the two genes implicated so far explain only ~1% of the variation in AIS traits. Further studies therefore remain necessary to determine precisely how mutations of GPR126 lead to AIS in humans.