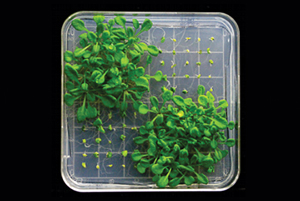 Enzymes called protein kinases modulate cellular activities in virtually every organism. They switch other proteins off or on by tacking on phosphate chemical groups—a process known as phosphorylation—to regulate the activity of downstream signaling pathways. Abscisic acid (ABA), a critical regulator hormone related to plant growth and survival, is one such protein that is modulated by protein kinases. Kazuo Shinozaki from the RIKEN Center for Sustainable Resource Science and colleagues have now obtained valuable insights into a family of kinases that link ABA signaling with another environmental stress pathway1.

Shinozaki’s group has spent over a decade studying protein kinases that modulate ABA function. “We have been interested in ABA signal transduction pathways in order to understand plant responses to environmental stressors such as drought, high salinity, cold and heat,” says Shinozaki.

The researchers previously found that SNF1-related protein kinase 2 (SnRK2) proteins help switch on various downstream effectors of ABA, and identified a subset of ‘subclass III SnRK2s’ that also helps plants respond to dehydration via a distinct signaling pathway. In their most recent research, in collaboration with Taishi Umezawa from the Tokyo University of Agriculture and Technology, Shinozaki’s group devised a series of experiments to identify downstream targets of these kinases that are involved in mediating the response to osmotic stress or ABA signaling.

Shinozaki and colleagues identified phosphorylated proteins in thale cress plants treated with ABA or subjected to dehydration and compared the results with those for a mutant strain called srk2dei, which is deficient in three key subclass III SnRK2 proteins. Their analysis revealed numerous differentially modified targets, with remarkably little overlap between the dehydrated and ABA-treated targets.

By analyzing the amino acid sequences that undergo modification by SnRK2 proteins under these conditions, the researchers gained valuable new insights into plant cellular signaling machinery. For example, they identified a link between the SnRK2 pathway and the mitogen-activated protein kinases, a family of signaling proteins with a critical role in virtually every cellular function. They also detected a novel protein termed SnRK2 substrate 1, which inhibits ABA-mediated growth restriction (Fig. 1) but is apparently unaffected by dehydration-induced signals.

Having demonstrated the power of this approach, Shinozaki hopes to delve deeper into how plants cope with environmental challenges—information that could assist the development of crops that can withstand drought and other crises. “We are interested in ‘osmosensors’ that can detect water deficit conditions,” he says, “and we will continue to analyze the roles of SnRK2 in osmotic-stress signaling.”