Improvements in efficiency stack up 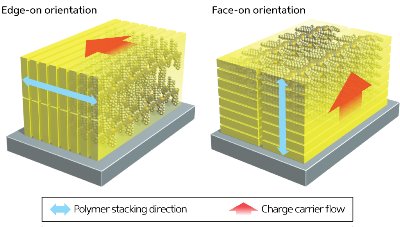 Figure 1: A small change in polymer structure changes how the polymer chains stack together in a thin film, resulting in a dramatic improvement in solar cell efficiency. © 2013 Itaru Osaka, RIKEN Center for Emergent Matter Science

Solar cells based on organic polymers are of great interest because the materials are both cheaper to make and easier to process than those used in traditional inorganic solar cells. To date, however, the very best power conversion efficiencies for polymer solar cells remain below the threshold for practical application. Itaru Osaka from the Emergent Molecular Function Research Group at the RIKEN Center for Emergent Matter Science and co-workers have now serendipitously discovered that changing the polymer’s structure results in a significant enhancement of power conversion efficiency1.

When light energy is absorbed by the polymer in a polymer solar cell, electrons are excited to higher energy levels to produce a high-energy electron and a corresponding electron ‘hole’. To convert the light energy into electrical current, these electrons and holes have to move through the polymer to the electrodes before they recombine and the energy is lost. Much research has been devoted to understanding how to improve this conversion process.

Osaka and his colleagues had been working with a particular type of copolymer containing a repeating naphthodithiophene–naphthobisthiadiazole structure called PNNT-DT. “PNNT-DT has very low solubility,” explains Osaka, “so we were interested in attaching additional alkyl side chains to the polymer to improve its processability.” As expected, this modification significantly improved the solubility of the polymer, but also significantly and unexpectedly improved the power conversion efficiencies of solar cells made with the polymer.

In the solar cells, the polymer is deposited as a thin film, and analysis revealed that these new ‘alkylated’ polymers were arranged so that the polymer chains lay flat in stacks on the surface rather than aligned perpendicular to it. This causes the charge carriers—electrons and holes—to move perpendicular to the surface rather than parallel, improving the power conversion efficiency (Fig. 1). “This unexpected change in orientation produced solar cells with an efficiency of up to 8.2% compared with just 5.5% for the unalkylated material,” says Osaka.

Ultimately, Osaka and his co-workers hope to exploit this dramatic efficiency enhancement in other polymers in order to move closer to producing polymer solar cells that can truly compete with the 15% or greater efficiency of inorganic solar cells. “We need a greater understanding of why this switch in polymer orientation occurs, and then we need to apply it to other polymers that can absorb a wider range of visible light wavelengths,” he says.