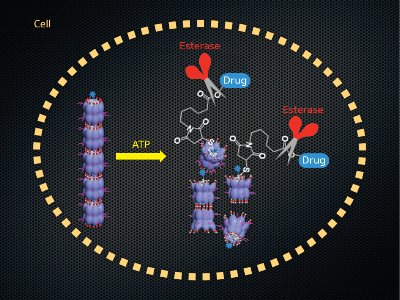 Figure 1: A chaperonin-based drug delivery system. A drug compound is attached to an irreversibly denatured protein via an ester linker. The protein sits inside the chaperonin cavity, which opens under the action of ATP in the intracellular environment. An esterase enzyme then cleaves the ester linker, freeing the drug. Modified from Ref. 1 © 2013 S. Biswas et al.

Biomolecular ‘nanocarriers’ formed by the careful assembly of protein subunits are common in nature and perform a range of essential roles in biological processes, powered by the biological energy carrier adenosine-5’-triphosphate (ATP). Takuzo Aida from the RIKEN Center for Emergent Matter Science and colleague Shuvendu Biswas from the University of Tokyo have now led the development of a prototype artificial nanocarrier that uses ATP to fuel the delivery of a therapeutic payload1.

Targeted drug delivery using artificial nanocarriers is a burgeoning area of clinical research, particularly for the treatment of cancer. Most nanocarriers designed to date to specifically target tumors generally rely on subtle changes in pH to sense cancerous environments. However, the pH difference around cancers is typically not large enough to selectively activate drug delivery by the nanocarriers.

Local ATP levels, on the other hand, vary significantly throughout the body. ATP concentrations are over 200 times higher within cells compared to the extracellular environment, and inflammation around diseased tissue triggers an immune response that increases local ATP production.

“We envisioned that if our nanocarrier sensed high-concentration ATP and broke up into short-chain fragments because of motions generated by its constituents, we could develop a conceptually new drug delivery system for tumor tissues and cells,” says Aida.

The researchers assembled their nanocarriers using barrel-shaped chaperonin proteins linked together by magnesium ions to form tubular structures. In nature, explains Aida, chaperonins trap denatured proteins inside their cavity through hydrophobic interactions and assist refolding. Once the trapped proteins are refolded, the chaperonins bind to ATP and undergo a machine-like opening motion that expels the guest proteins out of the cavity. The goal of the researchers was to exploit this ATP-enabled motion in their artificial nanocarrier to control payload transport and release.

In their proof-of-concept study, the researchers showed that a denatured fluorescent protein loaded into the nanocarrier recovered its folding and luminescent properties through the action of ATP, demonstrating that the chaperonins retained their biological function. They also showed that fluorescent dye administered to tumor-carrying mice using the nanocarriers selectively accumulated in cancer tissues and also the liver. “The liver absorbs most of the nanocarriers to excrete them from the body, so that only a small number of carriers reaches tumor tissues and cells,” says Aida.

The team is currently undertaking further development of their system for drug delivery. “Research for delivering real drugs is now underway,” says Aida.