Quantum dots made to measure 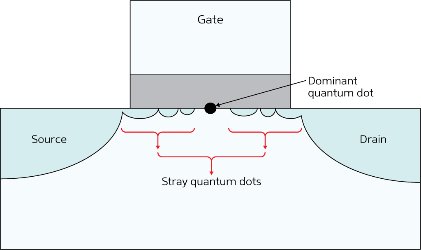 Figure 1: Structure of a transistor based on a quantum dot. One at a time, electrons flow from the source to the drain through the quantum dot, depending on the potential of the gate electrode. The properties of such a transistor are strongly affected by the presence of stray quantum dots in the transistor channel. © 2013 AIP Publishing

Transistors are one of the most important devices in electronics and lie at the heart of modern computing. The progressive miniaturization of transistors is rapidly approaching the atomic scale, where even the tiniest imperfection can have a significant effect on performance. Keiji Ono and colleagues from the RIKEN Low Temperature Physics Laboratory have now developed a method for measuring the operational characteristics of single-atom ‘quantum dot’ transistors without the influence of surrounding imperfections1.

When a pure material is implanted with isolated atoms of another element, the impurity atom can behave like a quantum dot, with properties quite different to its host matrix. Quantum dots can form the basis of transistor operation—switching an output on or off, depending on the state of an input—and can facilitate the transport of electrons through the transistor even when electron transport through the surrounding material, usually silicon, is blocked. In this configuration, while all electrons pass through the quantum dot, they can do so only one at a time. This makes the quantum-physical properties of the quantum dots dominant in the transistor’s operation, producing a characteristic diamond shape in the measured current–voltage relationship.

To counter such effects, Ono and his colleagues developed a measurement technique that allows them to quantify the effects of these ‘stray’ quantum dots so that the true properties of the main quantum dot can be isolated. The method is based on measurements of the transistor performance at various electrical voltages, which are analyzed using an electron transport model that incorporates the electrical effects of stray quantum dots. Among many uses, this information helps researchers to understand what voltages need to be applied to the transistors in order to optimize the single-electron transport regime.

Although the quantum properties of electron transport through quantum dot transistors only appear at low temperatures, understanding the processes involved is also important for the optimization of regular transistors at room temperature, which are known to be affected by the presence of single defects in the transistor channel, says Ono. “We know quite a lot about quantum dots. Applying quantum dot physics to commercial transistors is challenging but could have very useful implications.”