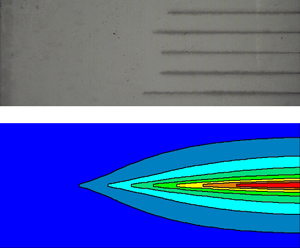 Figure 1: Photograph of laser-induced damage tracks in an optical crystal (top) and the distribution of temperature in the crystal as a laser beam passes through (bottom). © 2013 AIP Publishing

The transformation of infrared light to a different wavelength, such as visible light, is important in many applications. Some of the most efficient semiconductor lasers operate in the infrared region of the spectrum, whereas many useful applications of laser light, such as laser surgery or spectroscopy, require light of a different wavelength. The most efficient way to convert light into different wavelengths is to use nonlinear optical crystals, but these tend to suffer crystal damage at high laser intensities. Oleg Louchev from the RIKEN Center for Advanced Photonics and colleagues have now discovered that such crystal damage arises from small localized temperature rises due to photon absorption and electric field effects within the crystal1,2.

“Frequency conversion is often limited by laser-induced breakdown and crystal damage,” notes Louchev. Even if a crystal appears transparent to the naked eye, it will still absorb a significant fraction of the light that passes through. This light is absorbed by electrons in the crystal, which after being excited are accelerated to energies high enough to be able to produce point defects in the crystal lattice. If such processes occur repeatedly, they can lead to macroscopic damage tracks (Fig. 1).

The damage mechanism uncovered by the research team is also based on light absorption. Most of the energy absorbed by the crystal comes from the higher-energy visible light in the converted laser beam, and not the original infrared laser beam hitting the crystal. The visible light intensity ramps up as the infrared light passes through the crystal, meaning that more light is absorbed at the back than at the front. This creates a small temperature rise at the back of the crystal. In nonlinear optical crystals, a local temperature rise also causes an electric field in the heated spot. Thus, in addition to the generation of free electrons by light absorption, the electric field accelerates the free electrons, eventually leading to crystal damage.

Louchev and his colleagues verified this damage process through experiments using laser pulses of various intensities. The experimental observations agree with a theoretical model of the damage process. Even though only nanosecond-long laser pulses were used in the experiments, Louchev emphasizes that the observations are generic. “The proposed mechanism and kinetic pathway of breakdown might be involved in a variety of other processes where laser–matter interactions occur in nonlinear optical crystals, and also with laser pulses of much shorter timescales.”