Growing brains in the lab 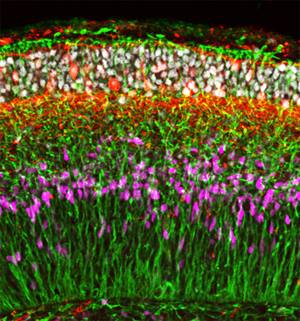 During development, the nervous system forms as a flat sheet called the neuroepithelium on the outer layer of the embryo. This sheet eventually folds in on itself to form a neural tube that gives rise to the brain and spinal cord—a process that involves the proliferation and migration of immature nerve cells to form the brain at one end and the spinal cord at the other. Yoshiki Sasai, Taisuke Kadoshima and colleagues from the RIKEN Center for Developmental Biology have now shown that human embryonic stem (ES) cells can spontaneously organize into the cerebral cortical tissue that forms at the front, or ‘brain’ end, of the developing neural tube1.

Sasai and his colleagues previously developed a novel cell culture technique that involves growing ES cells in suspension, and have shown that these cells can self-organize into complex three-dimensional structures. They have already used this method to grow pieces of cerebral cortex and embryonic eyes from mouse ES cells. And more recently, they have shown that human ES cells can also organize into embryonic eyes containing retinal tissue and light-sensitive cells.

In their most recent work, Sasai’s team treated human ES cells grown using their cell culture system with signaling molecules that induce the formation of nervous tissue from the outer embryonic layer. They found that the cells spontaneously organize into neuroepithelial tissue that then folds up to give a multilayered cortex (Fig. 1).

During human embryonic development, the neural tube thickens at both ends. In particular, the front end thickens dramatically as waves of cells migrate outward to form the layered cerebral cortex and other parts of the brain. An important finding of the team’s is that the front end of the neural tube appears to thicken due to the growth of radial glial fibers, which span the thickness of the tube and guide migrating cells, rather than due to the accumulation of immature cells within the tube, as previously thought.

The findings also highlight critical differences between the development of the neural tube in mice and humans. While in humans, the inner surface of the neural tube and the intermediate neuroepithelial zone underneath it contain distinct populations of neural progenitors resembling radial glia, the progenitor population in the latter is not present in the developing mouse cortex.

“Efficient generation of cortical tissues could provide a valuable resource of functional neurons and tissues for medical applications,” says Kadoshima. “By combining this method with disease-specific human induced pluripotent stem cells, it will also be possible to reproduce complex human disorders.”