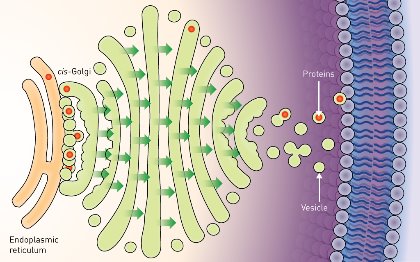 Figure 1: Whereas transport of proteins from the endoplasmic reticulum (ER) was previously thought to occur by the release of vesicles from the ER, new observations suggest that the cis-Golgi extends to make contact with the ER to capture newly produced vesicles. Modified from an original image by Judith Stoffer/US National Institute of General Medical Sciences

Eukaryotic cells contain a number of compartments, each surrounded by a membrane that water-soluble molecules are unable to cross. This means that dedicated transport mechanisms are needed to move molecules such as proteins between compartments. Kazuo Kurokawa and colleagues from the Live Cell Molecular Imaging Research Team at the RIKEN Center for Advanced Photonics have now revealed a previously unknown mechanism that facilitates one crucial transport step1.

About one third of all proteins are manufactured in a cellular compartment called the endoplasmic reticulum (ER). From the ER, they are passed to the Golgi apparatus—a series of membrane-bound compartments through which proteins pass as they are sorted for delivery to their final location in the cell. The entry point for proteins into the Golgi is called the cis-Golgi, and Kurokawa’s work focused on the mechanism that transports proteins to this location from the ER.

Researchers previously assumed that the mechanism involved the release of small sacs, or ‘vesicles’ containing the proteins from the ER. These vesicles diffuse across the gap to fuse with the cis-Golgi membrane and release the proteins inside. However, this mechanism includes no way to ensure that the vesicles reach the cis-Golgi efficiently. Furthermore, some proteins are too big to be packaged into normal vesicles, and the existence of so-far unobserved, oversized vesicles has been proposed to facilitate their transportation.

Kurokawa’s team looked in more detail at this transport step in yeast cells. They fluorescently labeled a structural protein of vesicles called COPII at release sites in the ER, as well as proteins in the cis-Golgi membrane. Sophisticated microscopy techniques then allowed them to watch the transport process directly.

“Our microscope system has extremely high speed and high resolution,” explains Kurokawa. “The images collected contain a massive amount of precise information, which makes it possible to use mathematical processing to localize fluorescence sources with very high accuracy.”

The team found that vesicles were not released from the ER. Instead, the cis-Golgi membrane extended, to come into direct contact with vesicles while still on the ER—a process the researchers called ‘hug-and-kiss’ (Fig. 1). Their experiments showed that the newly manufactured proteins are passed between the compartments during this contact.

“Our findings suggest that vesicles are not necessarily released, but are instead captured by the cis-Golgi before release,” explains Kurokawa. “This mechanism appears to be much safer than forming many free vesicles. If our proposed mechanism is correct, the release of oversized vesicles containing large proteins may not be needed.”