Higgs versus the Big Bang

The Higgs boson, which gives elementary particles mass, could also explain the earliest expansion of the Universe 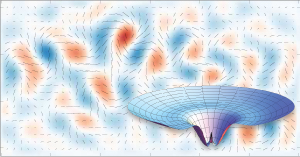 Figure 1: The influence of the Higgs boson and its field (inset) on cosmological inflation could manifest in the observation of gravitational waves by the BICEP2 telescope (background). Image courtesy of the BICEP2 Collaboration (background); © 2014 Fedor Bezrukov, RIKEN–BNL Research Center (inset)

Fedor Bezrukov from the RIKEN–BNL Research Center and Mikhail Shaposhnikov from the Swiss Federal Institute of Technology in Lausanne propose that the Higgs boson, which was recently confirmed to be the origin of mass, may also be responsible for the mode of inflation and shape of the Universe shortly after the Big Bang1. “There is an intriguing connection between the world explored in particle accelerators today and the earliest moments of the existence of the Universe,” explains Bezrukov.

The Universe started with a giant explosion known as the Big Bang, and has been expanding ever since. The expansion is balanced such that its shape is flat and not bent, which can only be the case for a very specific distribution of matter density.

The coupling between the Higgs boson and other fundamental particles provides mass. In the first moments of the Universe, however, coupling between the Higgs field and gravity accelerated the Universe’s expansion. An important parameter for this coupling is the mass of the Higgs boson. Experiments at the Large Hadron Collider at CERN (European Organization for Nuclear Research) have shown that the mass of the Higgs boson is very close to a critical value that separates two possible types of Universe—the stable one we know or a potentially unstable alternate.

Bezrukov and Shaposhnikov have now studied the implications arising from the Higgs mass being near this critical boundary and the impact this has on cosmological inflation. Through theoretical arguments, they found that as the mass of the Higgs approaches the critical value, gravitational waves from the Big Bang become strongly enhanced. The Big Bang is thought to have created many gravitational waves, which act like ripples in space and time, and it is these waves that are amplified for a Higgs of near-critical mass.

Experimentally, the influence of the Higgs boson could have significant implications for the observation of gravitational waves, which had eluded physicists until recently, when analysis of data acquired by the BICEP2 telescope near the South Pole suggested the first signs of gravitational waves in the cosmic microwave background that fills the Universe (Fig. 1).

The BICEP2 result, however, is far from unequivocal, with continued debate as to whether the incredibly faint signal of gravitational waves could really be detected in this way. The effects of a near-critical Higgs mass could put such debate to rest. “The Higgs mass at the critical boundary could explain the BICEP2 result,” Bezrukov explains.