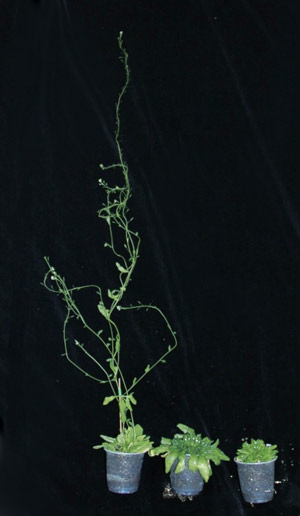 Gibberellins are a group of plant hormones that control everything from stem elongation to flowering time and fruit maturation. Protein regulators known as DELLAs repress the plant growth processes that depend on gibberellin hormones, but several studies have shown that other molecular mechanisms must be involved in helping to control gibberellin-dependent gene activity.

A team of researchers led by Jutarou Fukazawa from the RIKEN Center for Sustainable Resource Science has now identified a previously unknown protein called gibberellin insensitive (GAI)-associated factor 1 (GAF1) that interacts with DELLAs to regulate gibberellin signaling in the model plant Arabidopsis thaliana1.

Overall, gibberellins have a repressive effect on the genome, but exactly why has been unclear. That there is a strong interrelationship between gibberellins and DELLA proteins is widely recognized. Yet the mechanism of DELLA proteins, which normally prevent transcription factors from binding the DNA of target genes that are turned on by gibberellin, does not tell the full story.

Fukazawa’s team, which included researchers from the Tokyo University of Science and Hiroshima University, discovered GAF1 using a systematic screening strategy specifically designed to find proteins that interact with a DELLA called GAI. The researchers then bred various mutant strains of Arabidopsisto study GAF1 function. Plants deficient in GAF1 and a closely related protein called INDETERMINATE DOMAIN 1 flowered later than wild-type plants and were of shorter stature. In contrast, plants with elevated levels of GAF1 were taller than normal, with extended stems on the germinating seedlings (Fig. 1).

These phenotypic observations linked GAF1 to gibberellin responsiveness. Further experiments showed that GAF1 not only bound GAI but also various proteins known as TOPLESS-RELATED (TPR) proteins, which generally dampen gene activity. The picture that emerged is one in which DELLAs and TPRs interact with GAF1, acting as coactivators and corepressors of gibberellin-regulated genes, respectively. This helps explain why the effect of gibberellin on genome-wide gene expression is predominantly through repression, whereas that of DELLAs is through activation. It also pinpoints GAF1 as a central mediator of gene activity with a dual function, depending on its binding partner.

According to Fukazawa, these findings could have important implications for plant breeding and the agriculture industry. “The GAF1 complex is involved in gibberellin homeostasis and growth regulation,” Fukazawa explains. “We generated two kinds of mutated GAF1 proteins, which acted either as constitutive activators or constitutive repressors. This means we can control the function of the GAF1 complex, which could lead to control of flowering time and plant growth using these mutated GAF1 proteins.”