A critical point for the materials of tomorrow 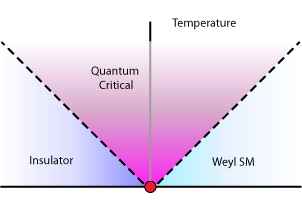 Figure 1: The critical point (red circle) between an insulator and the Weyl semimetal (SM) near absolute zero could provide a playground for unusual physics never seen before in conventional materials. Reproduced, with permission, from Ref. 1 © 2014 B.-J. Yang et al.

Naoto Nagaosa and Bohm-Jung Yang from the RIKEN Center for Emergent Matter Science and co-workers have discovered a previously unknown state of matter that can occur when matter switches from one exotic quantum state to another at temperatures near absolute zero1.

Matter is conventionally classified as solid, liquid, gas or plasma depending on the interaction and organization of its atoms. Recently, however, scientists have identified novel ‘quantum phases’ of matter that occur at extremely low temperatures near absolute zero as a result of specific types of interactions among electrons that only occur at these low temperatures. Just as early physicists were intrigued by classical changes from one state to another with increasing temperature, such as a solid melting to a liquid or a liquid evaporating into a gas, today’s researchers are now fascinated by changes between these exotic quantum phases brought about by quantum-level fluctuations known as quantum phase transitions.

Topological insulators are an example of an exotic quantum state in which the two-dimensional surface displays a protected conducting state that cannot be broken regardless of the nature of the surface, while the bulk of the material is insulating. However, it has been realized recently that topological phases can also occur in metallic systems.

One representative example of metallic topological states is a Weyl semimetal, which has topologically stable two-dimensional surfaces while its bulk state is electrically conductive. Through an investigation of the quantum phase transition between the Weyl semimetal and an insulator near absolute zero temperature, the researchers discovered a novel quantum criticality at the boundary between the two quantum states (Fig. 1).

“Topological quantum phase transitions are mediated by unusual particles, called anisotropic Weyl fermions, that have properties distinct from those of conventional electrons,” explains Nagaosa. The analysis by Nagaosa and his co-workers indicates that at the quantum critical point, anisotropic Weyl fermions are effectively non-interacting, which is in stark contrast to the behavior of conventional electrons.

“We show that the peculiar nature of these particles at the critical point gives rise to an unconventional quantum criticality in topological materials,” says Nagaosa. “Our ultimate goal is to further develop this theory and construct a general framework to understand and classify various quantum critical points associated with the topological phases allowed in nature.”

The result provides a more complete understanding of the electron–electron interactions that are at the heart of technologically relevant properties of advanced materials such as magnetism and superconductivity, and opens the door to new material physics.